Video of this song from youtube
Average Rating : 4.14
Total Vote(s) : 207
Please rate this song between 1 star and 5 stars (5 stars being the best). Just move your mouse on the stars above and click as per your rating. Your rating will really help us to improve our website. 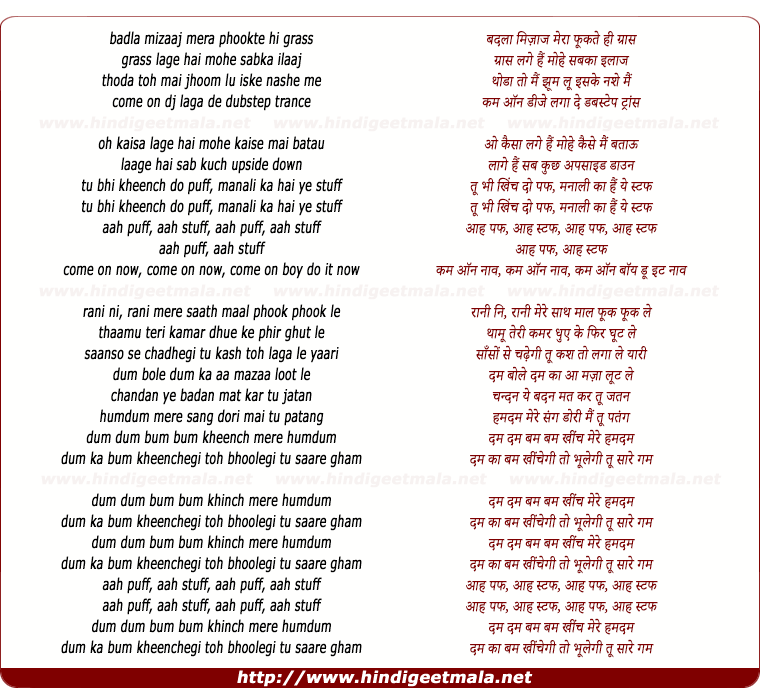 Comments on song "Manali Trance"
PRAKASH SINGH on Monday, November 10, 2014
As for talking about the western culture i would like express my
disagreement some of these guys who r commenting on so called Indian
culture...Do u think that outfit that we wear at home, or for office or at
party belongs to Indian culture, the food we eat the language we speak (not
to mention English) complete lifestyle of ours now a days is western... we
simply can not undo it has become our flesh and blood and nothing wrong in
it why are we so scared of western culture? one more there is nothing like
western culture they were more conservative than us but there culture and
Sanskrit have evolved with changing time. Now it is time for us Indian to
revolutionize our dated culture in tune with changing time. ﻿

Radio Junky on Saturday, October 18, 2014
Every one just open your eyes and for once just look at the credits:

Please people first check the description before saying anything about any
video.

Anyway great composition by Honey Singh and rap nicely performed by Lil
Golu. People who are criticizing the lyrics, well lyrics haven't been
written by Honey Singh and lyrics of bollywood songs are written according
to the situation of the song and is independent of the artist's opinions.
So stop bashing a singer or a composer for lyrics. ﻿

Nitin Gupta on Tuesday, November 25, 2014
Height - People are comparing Song with Rights and Wrong for the Society!
LOL What about other things that are being taught to a child at home? You
Drinking or Smoking in front of your own child with Friends? Is s/he
learning a Good Thing? STOP criticizing and Enjoy the Music. That's All !!!
Good Luck !﻿

Maryam M on Friday, December 05, 2014
Am I the only one who actually liked this and found this different compared
to all bollywood songs nowadays that sound the same ? :D I'm just saying
lets be open to some new stuff :D ( besides , if this brings u headaches ,
how come you didn't get headache from western dubstep songs ? :D )﻿

Umesh Shivdasani on Sunday, October 19, 2014
Sorry Guys, Everything Honey Singh is associated with does not have to be
good. If his songs have become popular until now, the law of averages will
catch up, and right from his album to this song, sorry again, it just is
not good. Maybe his next number will cut it YO YO﻿