Video of this song from youtube
Average Rating : 4.04
Total Vote(s) : 25
Please rate this song between 1 star and 5 stars (5 stars being the best). Just move your mouse on the stars above and click as per your rating. Your rating will really help us to improve our website. 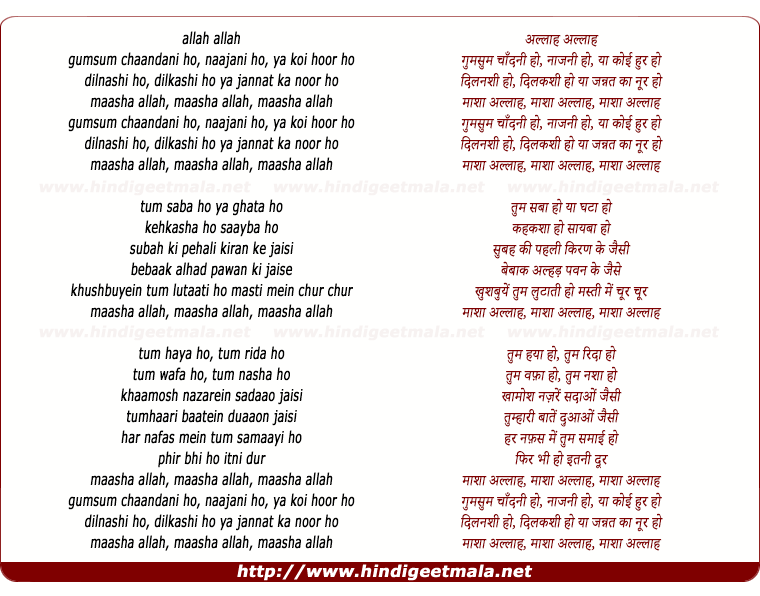 Comments on song "Masha Allah"
spanpinki on Saturday, July 03, 2010
@fusionfission There is a reason why Allah has created the plants and animals the way he has. I'm not going to sit here and give you the way the life of a plant works and it's model you can do your own research. Who told you plants can't feel pain? You don't have a scientific background, now do you? Explains your ignoarance. How is chopping the head of a goat with a sharp blade in a second a slow and brutal death? Are you not exaggerating? I was confused in your previous comment. But get it now.
spanpinki on Friday, July 02, 2010
@fusionfission Oh wow, you have started to compare human to their food? Plants and humans are completely different. As I previously stated we have been given morals and codes of ethic that we follow to live in our environment and this world easily without ruining the natural structure. Once you start sitting in front of the TV/computer 24/7 you become lazy, brain washed and sheeple. As your comment suggests. You have started to think of humans and especially women as a toy for your pleasure.
ViralMyFriend Sharma on Tuesday, June 29, 2010
@spanpinki , Do chicken, lamb and cow not feel pain like you and me? Why
did God give them feelings of love, fear and pain if they were created for
humans to kill them brutally and feed on their flesh. Why do you feel so
bad on the drinking blood thing, how is it so different from eating
somebody's flesh? I know my questions will bother you.. and you will shut
out your mind. You are brainwashed since childhood, so u blindly believe in
things that are so obviously logically flawed.

ViralMyFriend Sharma on Friday, July 02, 2010
@spanpinki I compared plants and animals, as you claim both of them as ur
food, I am simply comparing their characteristics to demonstrate to you how
they are created so differently. Plants are emotionless, painless and
fearless whereas animals who are killed in the most brutal way (halal way)
feel the most pain, fear and slow brutal agony imaginable . You seem to be
a bit slow in grasping logic, I don't know why you started comparing humans
and plants.

ViralMyFriend Sharma on Sunday, June 20, 2010
@spanpinki Then why do all the greatest saints who achieve nirvana go on to
wear minimal clothes. as they shed all man made inhibitions and worldly
things.. like Gandhi is one small example. Does ur morals stop u from
eating flesh and drinking blood of other animals? And u associate clothes
to morals, while ignoring other evil things u do. My ignorance makes u
sick, .. the taliban will also say the same words to me.. who is the
ignorant one here?