Average Rating : 4.40
Total Vote(s) : 93
Please rate this song between 1 star and 5 stars (5 stars being the best). Just move your mouse on the stars above and click as per your rating. Your rating will really help us to improve our website. 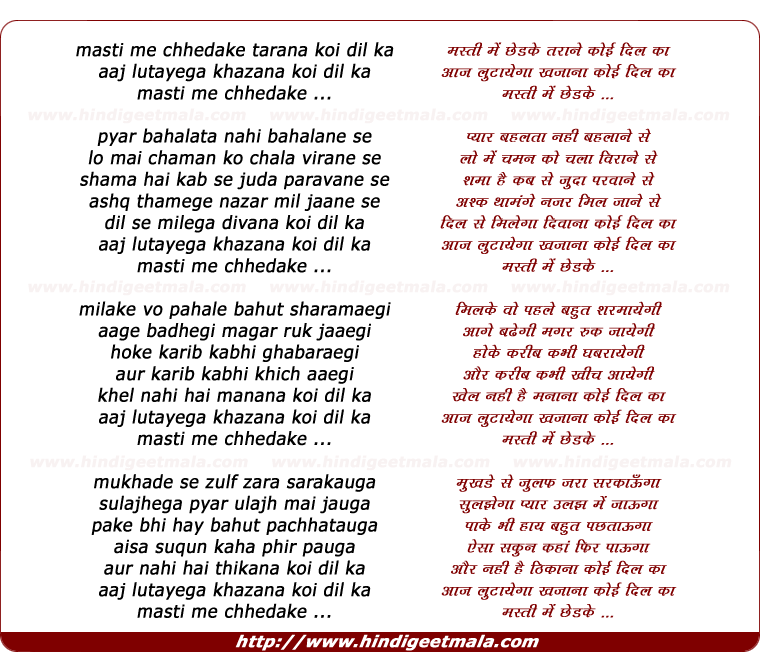 Comments on song "Masti Me Chhedke Tarana Koi Dil Ka"
mialvi9 on Thursday, June 25, 2015
I find it hard to believe that such a marvelous song has only 21k views
whereas some extremely ordinary songs enjoy millions of views. Is it
because people don't know that such gems exist? If so, how can it be made
known? I don't know, and frankly speaking, at this time I don't want to
know. All I want to do is put this song on repeat play and enjoy the
incredible lyrics of Kaifi Azmi, music of Madan Mohan and voice of Mohd.
Rafi.﻿

jaguar unleashed on Sunday, October 04, 2015
great classic song picturised in the grand locations of ladakh which takes
the song to a different dimension or level.
really man those good old songs﻿

Jignesh Jani on Friday, May 30, 2014
Rafi saab I am pretty sure that many of our neighbours were envy of India,
just because they didn't have you and we had you...﻿

Raman Beri on Sunday, March 22, 2015
The actor in the song is Vijay Anand, later who him self
became good director.Masti bhra song.﻿