Video of this song from youtube
Average Rating : 4.24
Total Vote(s) : 307
Please rate this song between 1 star and 5 stars (5 stars being the best). Just move your mouse on the stars above and click as per your rating. Your rating will really help us to improve our website. 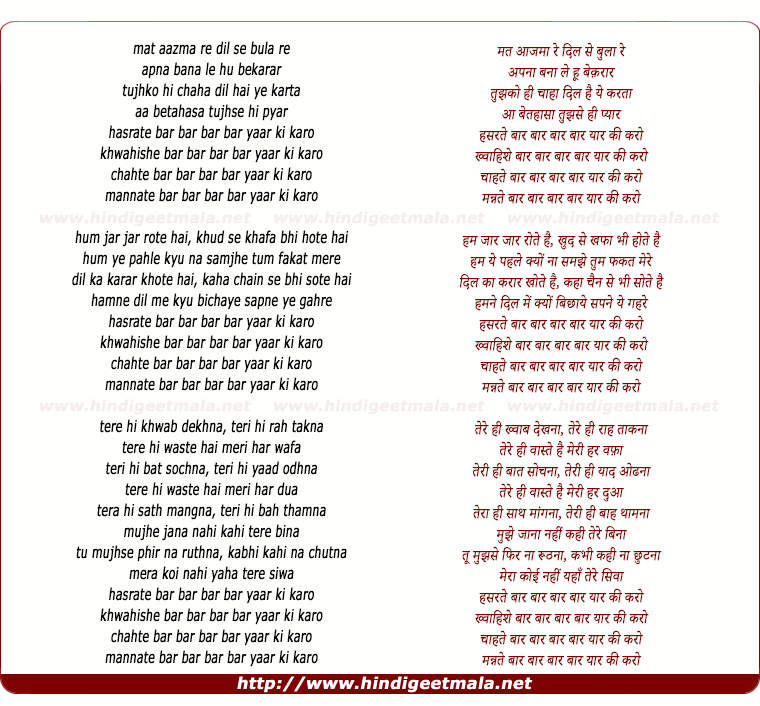 Comments on song "Mat Aazma Re"
Chirag Shah on Friday, February 01, 2013
you've unintentional stated a MAJOR problem that exists in bollywood.You
said Emraan is more of a "hero/romance guy"...The point is that acting is
about playing different characters and NOBODY should be pushed to a
particular corner. Every actor can play every character but in India people
tend to create an IMAGE for different actors which is wrong.Look at
hollywood, most actors do a variety of different roles because they have
that freedom (and talent of course).Don't say such things.

Sumit Kumar Mishra on Friday, January 18, 2013
every1 who has true sense of voice wud definitely b a fan of a voice like
KK..it is the complete & perfect I have heard yet, it is neither to
deep, nor too sharp, has the best range both in terms of notes in ability
to mould according to the songs needs...he thus regularly gets songs
whether for a new actor or a veteran.. dats y musc directors as varied as
Vishal-Shekhar, Anu Malik, Shankar Mahadevan, Pritam, Nadeem-Shravan,
Jatin-Lalit regularly use him over others

Sumit Kumar Mishra on Saturday, January 19, 2013
YAA its the same man !!!!..ab music direct karne milega i nai to KK ko
kis liye use karenge...i just meant his voice suits all genres n he can do
justice almost equally to all types of songs n his voice type is made 4
playback...may b he isn't the best singer of btown but he is definitely the
best playback singer.