Video of this song from youtube
Average Rating : 4.30
Total Vote(s) : 110
Please rate this song between 1 star and 5 stars (5 stars being the best). Just move your mouse on the stars above and click as per your rating. Your rating will really help us to improve our website. 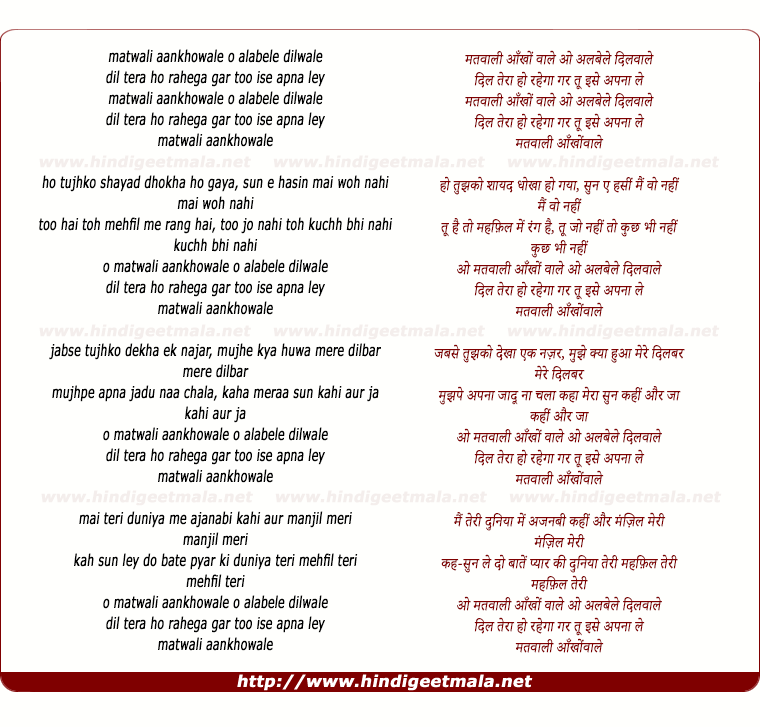 Comments on song "Matwalee Aankhowale O Alabele Dilwale"
Zil Hasnain Kazmi on Tuesday, February 01, 2011
What we remember from childhood we remember for ever. It was one of those
days when we were dependent on Radio Ceylon; this was the only source at
that time. We used to fulfil our desires through this channel. Now Rajshree
ji you are doing excellent work and providing services to the music
listeners, an opportunity so they can listen what ever they want and when
ever. Well done.I would like to thank you for your efforts. You deserve
tapping. Keep it up.(01-02-2011)

rsg82 on Monday, October 08, 2012
i first heard this song on rd burman's "all songs ever created by him" cd..
i fell in love with it immediately. the composition is amazing and i love
how in the old times they incorporated other cultures so well.

angandhe on Thursday, July 08, 2010
1961 Classic rd was introduced in this film.Film was made by father of
Mahmood Mumtaz ali. Directed by Akbar brother of Mahmood. Most probably it
was ghost directed by Mahmood.