Video of this song from youtube
Average Rating : 4.48
Total Vote(s) : 86
Please rate this song between 1 star and 5 stars (5 stars being the best). Just move your mouse on the stars above and click as per your rating. Your rating will really help us to improve our website. 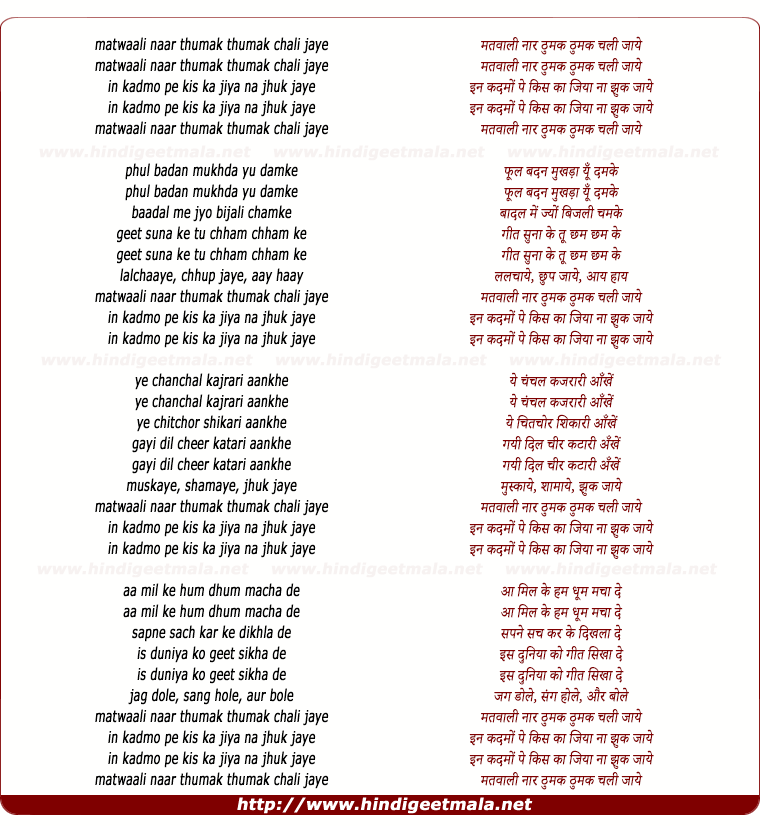 Comments on song "Matwali Naar Thumak Thumak Chali Jaye"
Priya MyMusicalHeaven on Tuesday, February 19, 2013
Once again, you said it! I mean, you captured the essence here. If I may
add, IMHO, though a bit restrained at times, Waheedaji exhibits her dancing
skills here and sets the bar high (her dances in 'Guide', which was
released later, although more popular, seem to be easier than this one).
She was one of the most graceful dancers, IMHO. And, Mukeshji added so much
more to this semi-classical song of S-J. Thanks for another high quality
upload, Ajajyji.

Bharat Gul on Tuesday, February 19, 2013
Those moments at the start, when the instruments, especially the sitar and
the tabla, and Mukesh's alaap unleash the first exuberant dance steps of
Waheeda Rehman and her sakhis, are the ultimate glory of this clip. The
bursting flowers of joy in Waheeda Rehman's heart infect the viewer like an
instant contagion. Thanks, Ajay.

reverseswing on Sunday, July 13, 2014
No doubt Nargis, Madhubala, and Meena Kumari were very popular as heroines
but
they were not good dancers. In fact Vijayantimala is the first heroine who
brought glory to this Art in Indian Cinema. Later Waheeda Rehman, Rekha and
others
continued ﻿

parbhu shankar purohit on Friday, May 08, 2015
classical dance based on rag Bihag,beautiful lyrics by shailendra and music
coposition by the great shankar jaikishan ji,melodious voice of Mukesh ji
and dil cheer dance by vaheeda ji.﻿