Average Rating : 4.52
Total Vote(s) : 31
Please rate this song between 1 star and 5 stars (5 stars being the best). Just move your mouse on the stars above and click as per your rating. Your rating will really help us to improve our website. 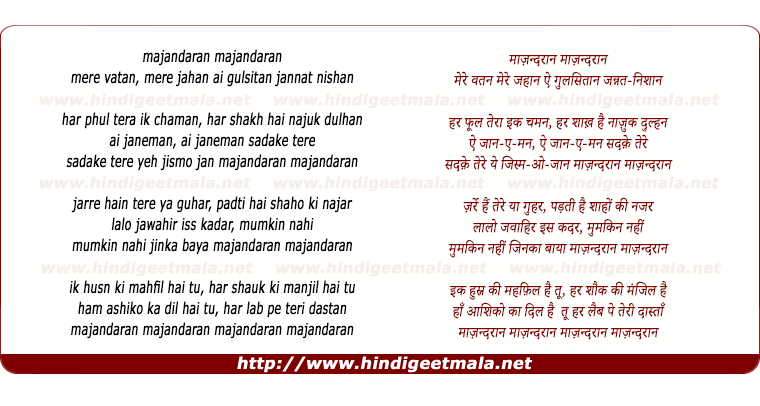 Comments on song "Mazandaran Mazandaran"
M. Saleem Raikodi Raikodi on Monday, September 28, 2015
Talat Mahmood had his limitations though, just like any immortal. Sajjad
Hussein was perhaps the best Music director then but even he had his flaws
as well. That of being short tempered and over candid. There are episodes
of him belittling Lata, Saying you are singing for Sajjad not Naushad.
Either he was overtly arrogant or petty or artistically genius.﻿

Nilesh Modi on Tuesday, February 26, 2013
A visitor to Rustam’s court is asked where he is from. He replies:
Mazandaran..my native, my world, a garden found only in heaven 1) Each
flower of yours is a garden, each stem a delicate bride/O my beloved,my
life and limbs are for you 2) Your sands is gold so all shahs’ (king) eyes
fall on you/diamonds are so abundant that it's not possible to explain 3)
You are the bevy of the beauty, ultimate destination of lust seekers, and
the heart of us lovers, on every lip is your story..Mazandaran...

ramesh passi on Monday, June 22, 2015
Is this a voice of talat mehmood or sume body else..sajjad husain dislike
talat nd named Galat mehmood as it was known to every body..﻿