Video of this song from youtube
Average Rating : 4.22
Total Vote(s) : 50
Please rate this song between 1 star and 5 stars (5 stars being the best). Just move your mouse on the stars above and click as per your rating. Your rating will really help us to improve our website. 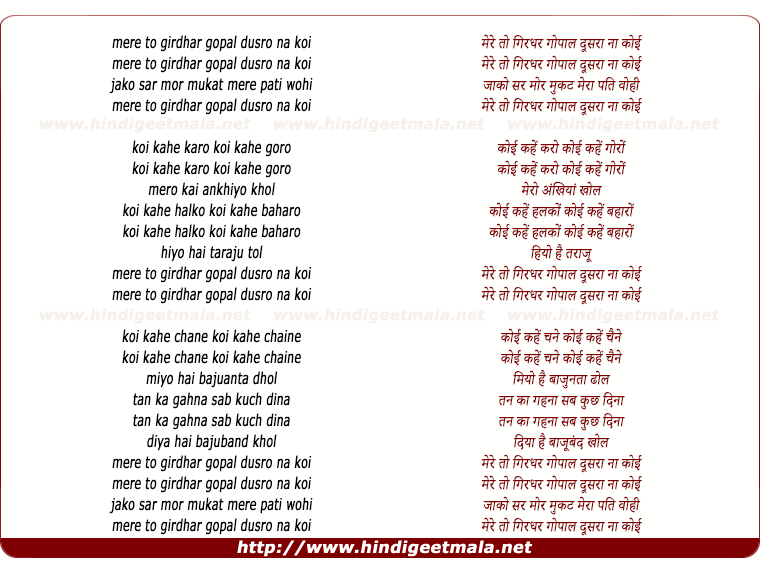 Comments on song "Meera To Giridhar Gopal Dusra Na Koi"
samaganam on Saturday, May 12, 2012
Meera bai had a Guru Indeed.Sant Rai Das was her GURU.Also she belonged to
that period of Bhakti movement.If you read the book by Al-biruni about
India you will come to know that today's India was the same as it was in
1000 AD.Some were non believers,some had radical views,some not so sure.But
it was these saints who started the Bhakti movement starting 14-18 century
and instilled Bhakti in all Indians.Koti Koti Pranams to these beautiful
saints.We owe everything to them.

sanjitas on Wednesday, December 02, 2009
yes, she looks divine here, specially , if you wantch her scene arguing with the guruji when she is being given death sentence towards the last part of movie, she looks and sounds divine here...she is good actress, no doubt.
sanjeevpppp on Tuesday, June 23, 2009
Lata was to sing for this film. But her own album of Meera Bhajans 'Chala Wahi Des' released at the same time. She excused herself and Vani Jairam stepped in.
neelamjainful on Saturday, March 12, 2011
wonderfull bhavna bhakti of meera presented in this bhajan, hearttouching lyrics, music , singer's voice too...
UsherRed on Sunday, August 17, 2008
It's one thing to see Hema all glammed up, looking exceptionally beautiful and stunning in all of her princess-y outfits and multi-colored saris, but it's a totally different and pleasant experience once she is seen in a simple sari. Her radiance and utmost glow, both inside and out, just shines through once she is in her traditional attire, looking lovelier than ever. The only actress that can balance the best of both worlds in such an excellent manner. She is truly a gift to the film industry.
View all 42 comments related to song Meera To Giridhar Gopal Dusra Na Koi