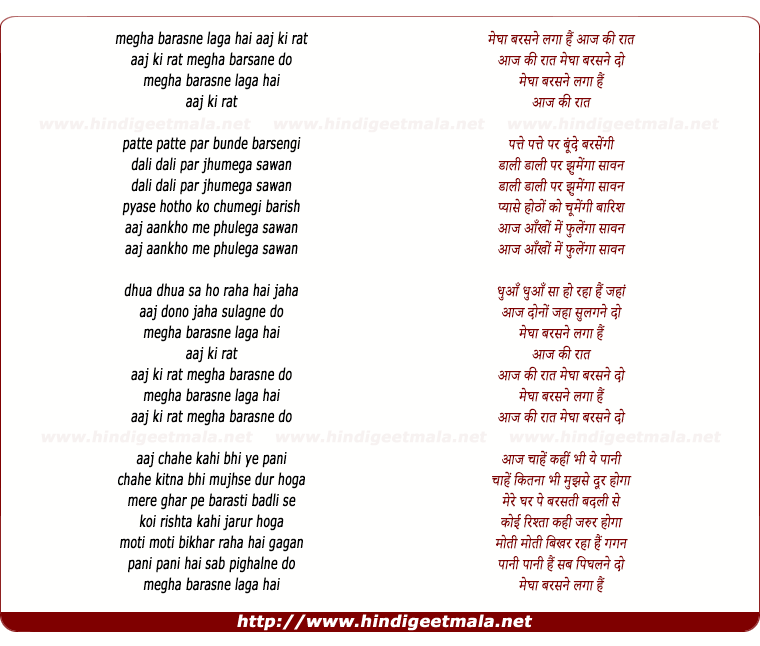 Comments on song "Megha Barasne Laga Hai Aaj Ki Raat"
n0rmalll on Friday, August 12, 2011
.. continued As far as lata-asha rivalry is concerned, no one is right person to comment on it except Lata-Asha themselves. They have commented number of times that its dirty media spreading such rumours. When Asha herself doesn't complain about it and when she always praises Lata for Lata's contribution in the life of Asha and other Mangeshkars, who are we to pass and spread such bad comments.
n0rmalll on Friday, August 12, 2011
..continued Till date people like me have always heard this song only and only on vividhbharti through its programmes like Sangeet Sarita , Aap ki Farmaish and other programmes. It's only because of vividhbharti that people remember this song and then search it on google and find it on you-tube.
shahid aly on Sunday, September 26, 2010
what an outstanding song in every respect. but never re-issued by HMV or
played by vivith bharti etc. Why ? because their beloved Lataji didn't sing
this semi-classical composition which her sister shouldn't have touched.Its
lata territory !

fareedooni on Tuesday, August 23, 2011
Respond to this video... yes , my friend don't fool yourself. Lata is jealous of Asha's success and done everything to nip her career from day one.but never mind...now the radio stations don't play Asha except the ho-hum songs. She can record all she wants ! Lata has finally destroyed her sister professionally. FULL MARKS to LATA Ji ...she is the greatest !
View all 9 comments related to song Megha Barasne Laga Hai Aaj Ki Raat
Popular Links on HindiGeetMala