Video of this song from youtube
Average Rating : 4.18
Total Vote(s) : 55
Please rate this song between 1 star and 5 stars (5 stars being the best). Just move your mouse on the stars above and click as per your rating. Your rating will really help us to improve our website. 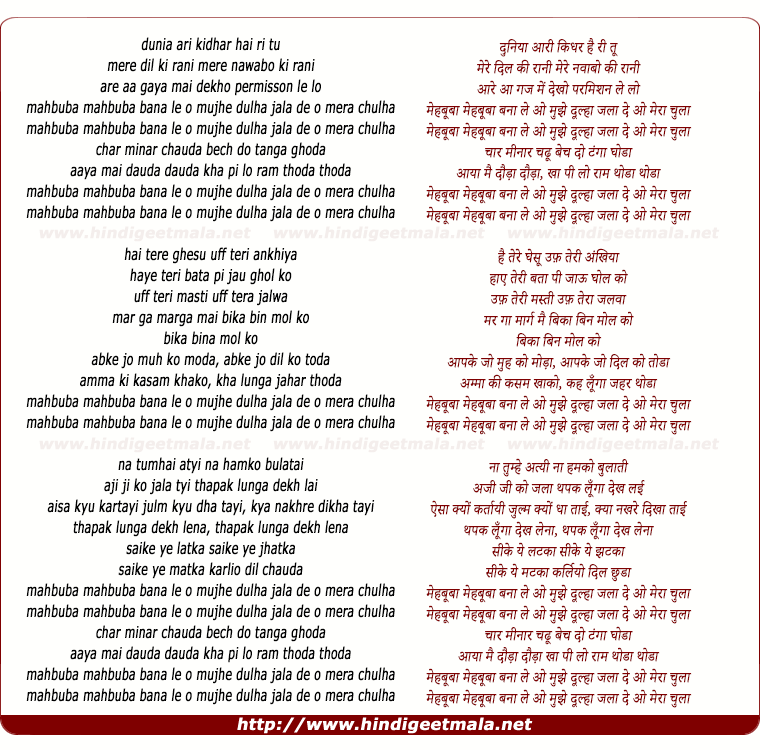 shahidrafifan on Tuesday, March 17, 2009
Mohammad Rafi the greatest singer in the world ever. what a voice what control, what skill, what range, inimitable even today. Underrated by indian film industry who only awarded him a handful of awards and none posthumously. Just look at the shear number of difficult songs he sang. A pillar of the industry. They should mourn the loss of such talant every night and every day
rekhalalit on Thursday, August 26, 2010
Mohammed Rafi Sahab always Awesome, Fabulous & Excellent in every song. No
words to define his excellency & sweetness about singing. He was an "ANGEL"
of Brilliant Golden & Magical voice. He is Immortal in this world. For me
he is GOD. Prince Lalit Bhambhani Atlanta, Georgia ( USA )

Ajay Arora on Saturday, August 16, 2014
SORRY BRO DONT FEEL BAD. BUT FIRST OF ALL YOU HAVE TO KNOW THE MEANING OF
DIFFERENCE AND COMPARISON. I AM JUST TELLING YOU THE DIFFERENCE BETWEEN THE
CERTAIN AAKASH CHOPRAS AND A SACHIN TENDULKAR IN CRICKETING SENSE IF YOU
UNDERSTAND BETTER.﻿

SamSungSamSung9999 on Friday, November 26, 2010
They have copied the style of the song "Hum Kaale Hain to Kya Hua Dil Wale
Hain" from Gumnaam (music SJ) in both the music and choreography. LP have
done an admirable job here, though the results are not really comparable
with the SJ classic.