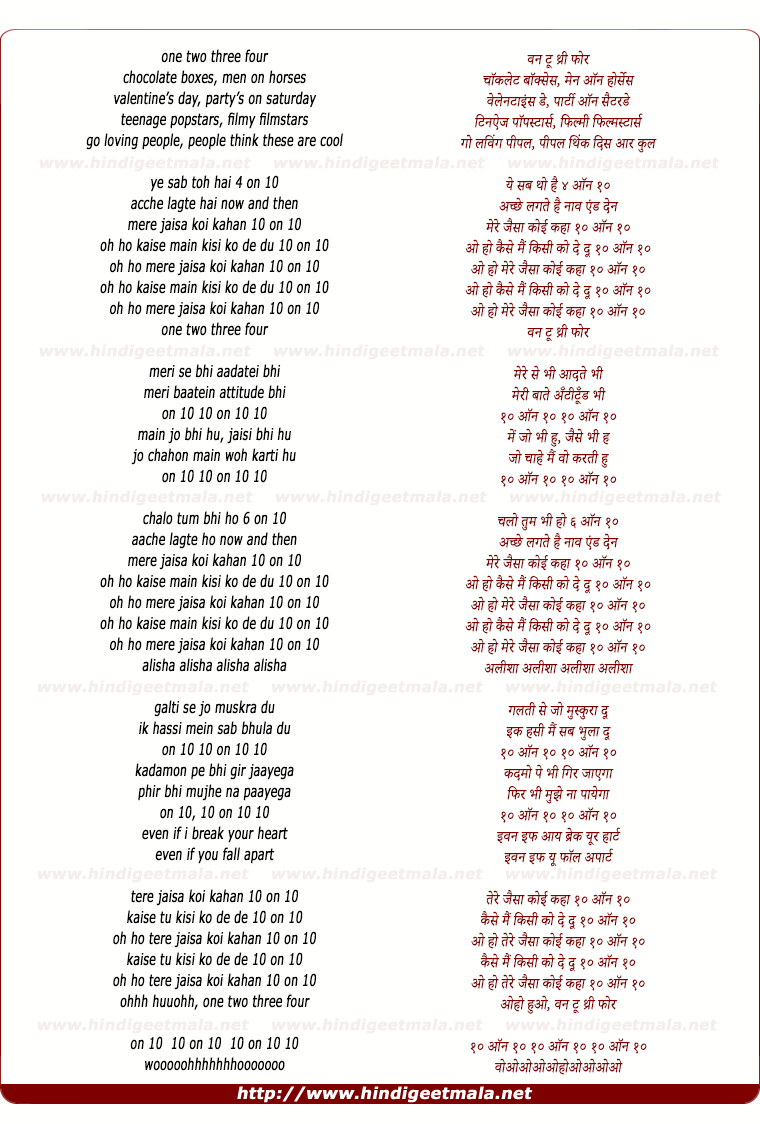 Comments on song "Mera Jesa Koi Kaha Ten On Ten"
MrBoomBoomPow17 on Sunday, December 06, 2009
Guys, I think we're being a bit narrowminded here. There are different kinds of rock - there's classic rock, heavy metal, soft-rock, emo rock, punk rock, glam rock, gothic rock and pop-rock to name a few. 10 on 10 is a pop-rock song you'd expect to here from a Disney Channel Soundtrack akin to the likes of Demi Lovato, Hannah Montana and the Jonas Brothers that some teens/college students like to listen to. Pri and her friends are just having a gig at a college -this isnt a concert!
hammadahmad100 on Sunday, January 03, 2010
but i think that is what i also meant.. her poor performance is kinda embarrassing.. she shouldn't have picked that role.. usually she is quite careful about picking roles that really suite her..
but anyways, i don't remember exactly what i said here and i can't see my comment because either some diehard fan of hers got offended by my comment or some self-claimed guardians of liberalism thought i was being narrow minded so my comment is now hidden..

llJ613Pll on Wednesday, December 09, 2009
im actually starting to really like this song. it takes a few hearings for
it to grow on you but its a good song. very disney channel like. you just
have to keep that in mind while hearing it.. think miley cyrus and jonas
brothers lol. i hope they went orginal with the story. i always find the
"geek and beauty falling in love" concept interesting so hopefully its
originally and uniquely done.. and not going the typical bollywood way.


desigirlfan3000 on Friday, December 25, 2009
priyanka is sooooo versatile. from her arrogant model role to her college mahastran girl to now this popular rockstar. i don't know any other actress who can pull all these roles off so perfectly. so energetic! not to mention the brilliance in which she pulled off all the roles in WYR.
hba71 on Monday, December 07, 2009
Well folks that's why PC is an actress and you're not, she has the
confidence to go out there and do her thing regardless of what others
think. And don't say you're embarrassed for someone cus you all don't act.
If you're hating then don't watch her stuff, simple as that.