Average Rating : 4.54
Total Vote(s) : 41
Please rate this song between 1 star and 5 stars (5 stars being the best). Just move your mouse on the stars above and click as per your rating. Your rating will really help us to improve our website. 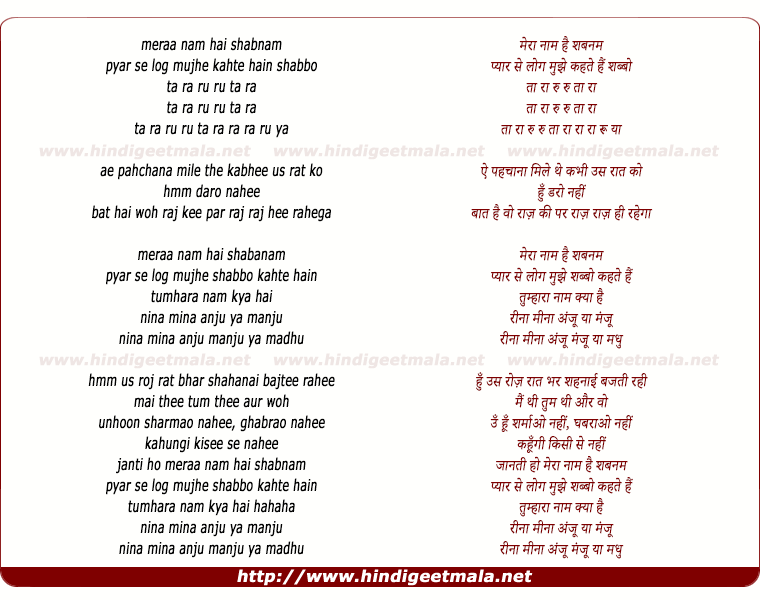 Comments on song "Mera Naam Hai Shabnam"
Maya Majumdar on Monday, November 08, 2010
Even today it is fresh. RD & Asha combine is a masterpiece. Why today's
comp. cannot give something worth listening and lasting in to Humm in our
day to day life. They don't have one basic thing is TALENT but have great
urge for money and skyhigh fame, OSCAR award, net 5 crore with just drab
music , widely critisiged. Hey U, learn somethig just 6 or 8 tracks will
not help anymore.

chishideki on Saturday, July 11, 2009
the name of the movie is Kati Patang. it's hilarious, but this lady scares me. she's crazy!
for you guys complaining about the quality, you have to realize it was made in the '70s in India. even the DVD quality is a bit sketchy.

ASHOKES67 on Tuesday, October 19, 2010
A SUPREME COMPOSITION BY R.D.BURMAN, BINDU, RAJESH KHANNA, ASHA PAREKH, AND OTHER CO- ARTISTS. THIS JEWEL WAS OF 1970 . LET US PAEY WE GET SUCH GEMS NOW , COME- ON THOW A CHALLENGE. WHY CANT WE DO OR GET SUCH GEMS NOW ?
sam strong on Tuesday, February 25, 2014
Very Wicked Indeed. This is not a song nor a cabaret but still very
captivating.
The dancer is superbly dressed. In fact the outfit she is sporting is very
much in fashion in LA and New York disco's nowdays with the rock
singers.This movie is made in 1970's so hats off to designers and also also
to the dancer for doing such a great job.﻿

hellohemantkumar on Saturday, September 06, 2008
I really admire the music composition of R D Burman ji.Did you know that he had his formal training in the US which was initially experimented in BHOOT BANGLA IN THE EARLY 60S.A real talented personality.Those were the days when the anglo-indian community was at their peak regarding the fashion in India.
View all 27 comments related to song Mera Naam Hai Shabnam
Popular Links on HindiGeetMala