Video of this song from youtube
Average Rating : 4.34
Total Vote(s) : 204
Please rate this song between 1 star and 5 stars (5 stars being the best). Just move your mouse on the stars above and click as per your rating. Your rating will really help us to improve our website. 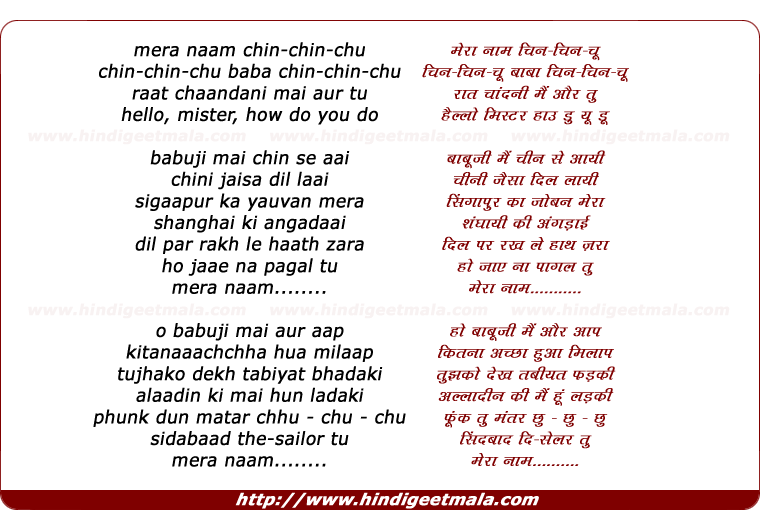 Comments on song "Meraa Naam Chin Chin Chu"
joeyjojojimmyshabado on Saturday, October 06, 2007
Just to provide some clarity, I'll just add this, I know it's easy to get confused with the Bollywood stuff, but rarely, if ever, is the actor or actress the same person who is truly singing. This is why there are singing credits, and acting credits. Usually in India, especially in the Bollywood musical film industry, songs are composed by one person, they hire a singer to sing the song, and the actress hired to be in the film will lip synch to the song during the film.
Q on Saturday, February 09, 2008
Let me clarify.. Singer: Geeta Dutt(formerly known as Geeta Roy) Dancer:
Helen(oiginally from Burma) Lead Actors in this movie: Ashok
Kumar,Madhubala Music director: O.P. Nayyar Completely sure about this info
as I am an avid fad of Hindi movies, born n brought up in Bombay, have been
hearing this song ever since I was a kid!

sjalcapricorn on Thursday, April 28, 2011
All-time great foot-tapping song by the great OP Nayyar and perfectly
rendered by Geeta Dutt. Last but not the least, it is the also the genius
arranger Sebastian D'Souza who has a lion's share in arranging a great deal
of golden era songs, this being a stand-out performance.

stiffler3586 on Friday, April 11, 2008
She is Helen,icon of the item dance number in Bollywood cinema.
Helen has appeared in over 500 (some estimates come closer to 700) movies in a career that spans 40 years and she has danced in in nearly every single one of those movies, sometimes more than once.

Razor Edge on Saturday, October 04, 2008
She was about 18-19 when this movie was made (1958). As has already been
pointed out, she was born in Burma to an Anglo-Indian father and Burmese
mother. I guess that's probably why she was pretending to be a
Chinese/Singaporean girl in this song?