Video of this song from youtube
Average Rating : 4.38
Total Vote(s) : 228
Please rate this song between 1 star and 5 stars (5 stars being the best). Just move your mouse on the stars above and click as per your rating. Your rating will really help us to improve our website. 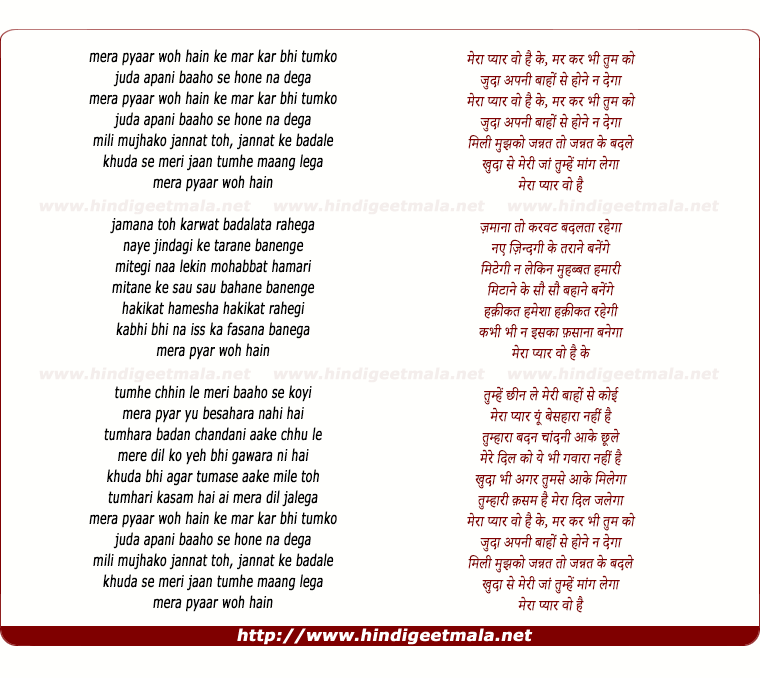 Amlan1965 on Friday, July 20, 2012
Ausesome ethreal, beuatiful song Mile mujhko jannat, to jannat ke badle...
Khuda se mere jaan tumhe maan legs..( Were I to be offerred heaven, I would
rather ask for you in liew of heaven, such is the power of my love)
Mahendra Kapoor Jee at his very best in the romantic mode...quite different
from Desh Bhakti for Manoj Kumar. Lyrics by S H Bihari Sahib, music by
great OP Nayyar Sabib. Sharmila Tagore looks like a mermerising mermaid,
luring Simple Biswajit to the depths of the sea...

listeningforpleasure on Thursday, November 25, 2010
This is Mahendra Kapoor at his peak. BR Chopra was one of the few who gave
him breaks. Gumrah, Humraz, Zindagi Aur Maut, Stree, Navrang, Dharmaputra
and this one Yeh Raat Phir Na Aayegi would not be remembered much if he had
not adorned this films with his brilliant and memorable singing. May his
soul rest in peace! Thank you very much for the upload

Jagjit Singh Ishar on Saturday, July 27, 2013
Rafi sahib is my most favorit & i am a die hard fan of rafi sahib for his
vast talents but plz don't under rate the other singers. Do u mean that
Mannadey Mukesh Hemant, Kishore Talat & Mahinder were all less talented &
on many occassions rafi sahib has praised all these singers. So all are gr8
& Rafi sahib is also gr8, no comparison between singers.

Naveen Dighe on Saturday, August 13, 2011
@MRafisahabgems THIS MUST BE YOUR VERY PERSONEL VIEW THAT WITHOUT RAFISAHAB
THERE IS NO BOLLYWOOD PLEASE BE INFORMED THE YEAR 1969 SAW KISHORE KUMAR IN
LIMELIGHT AFTER ARADHANA AND POST ARADHANA RAFI NEVER EVER GAINED THE
LIMELIGHT TILL HIS DEMISE MEANING RAFI NEVER EVER REGAINED HIS PAST GLORY