Video of this song from youtube
Average Rating : 4.57
Total Vote(s) : 44
Please rate this song between 1 star and 5 stars (5 stars being the best). Just move your mouse on the stars above and click as per your rating. Your rating will really help us to improve our website. 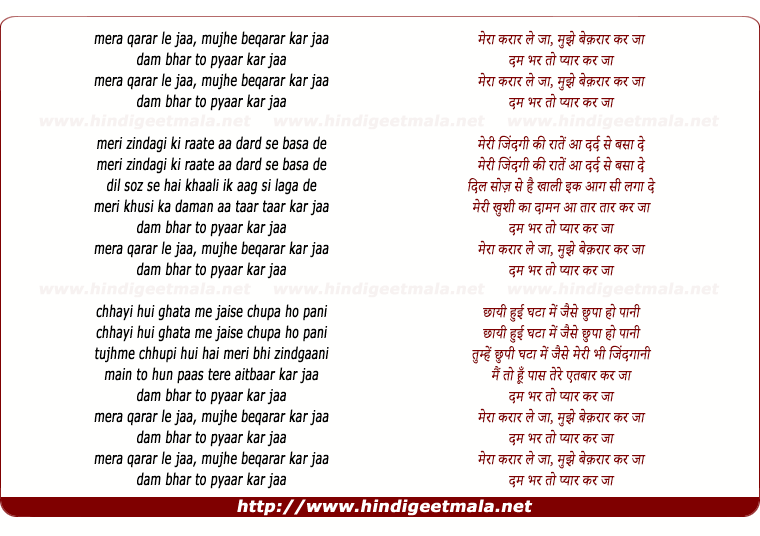 Comments on song "Mera Qarar Leja, Mujhe Beqarar Kar Ja"
rumahale on Saturday, September 11, 2010
@crazyoldsongs I am delighted to find the first comments - certainly it
makes lasting impression just as this song has been. It is my great fortune
to have an exclusive information. I was lucky to have Tarana movie clips;
now I request you to see if Ashiana VCD is available locally. Those were
the early days of Madan Mohan, who had incidentally good friendship with
Raj Kapoor. Thanks.

Durgamaaji on Sunday, July 21, 2013
Lata ji excels as always, in my humble opinion, Talat ji sounds breathless,
has no voice control nor modulation; he is just not as cultured and
professional as the Queen of the Indian Sub-Continent! Lata ji has by far
out-sung Talat ji and I applaud her for never ceasing to amaze me

NANDI KHANNA on Tuesday, November 08, 2011
In tandem songs mighty Lata ji lags behind her male counterparts,though
sung flawlessly,she looses out to Talat saab,who was no match to her vocal
prowess.Sometimes 'uniqueness' in the voice plays a vital role & goes ahead.

Kanu Mody on Tuesday, November 22, 2011
SIR , WOULD IT BE POSSIBLE FOR YOU SIR , TO RE - LOAD BOTH VERSIONS OF THIS
IMMACULATE SOLO BY INCREASING THE CLARITY AS WELL AS INCREASING THE S O U N
D Q U A L I T Y TO WHATEVER EXTENT IT IS POSSIBLE . THANK YOU.