Video of this song from youtube
Average Rating : 4.27
Total Vote(s) : 63
Please rate this song between 1 star and 5 stars (5 stars being the best). Just move your mouse on the stars above and click as per your rating. Your rating will really help us to improve our website. 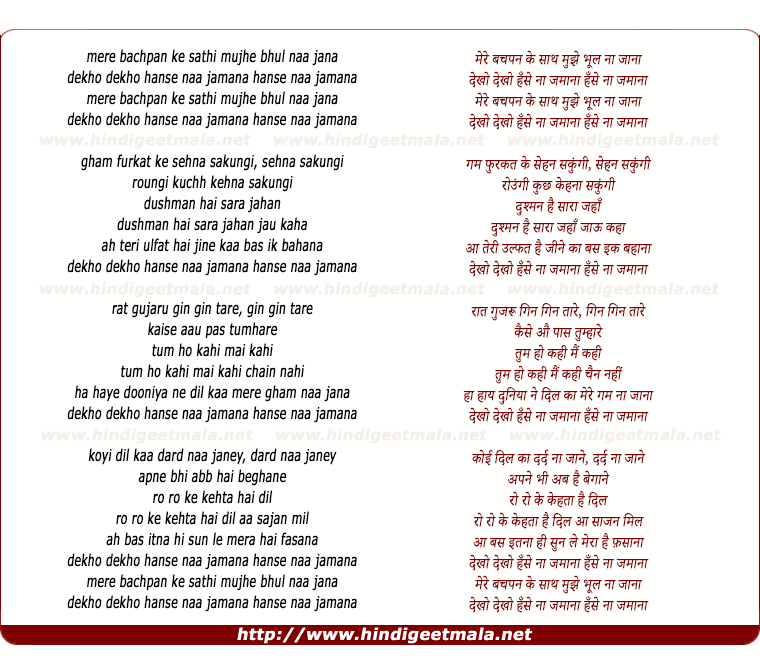 Comments on song "Mere Bachpan Ke Sathi Mujhe Bhul Naa Jana"
alishah7706 on Tuesday, October 05, 2010
not just great singer, she is the greatest ever singer of subcontinent of films. greatest throat, sweetest voice surely more than honey, most melodious voice of subcontinent and attraction has no match. madam is the greatest ever film personality specially in subcontinent.
kk10061 on Thursday, February 10, 2011
noor jehan jee you are gone but what you haveleft for us .this song is like a 5 years your son and you want to be with him all around him or in other word s this song will remain with you till you also leave this world
Ali Usman on Friday, December 26, 2014
I cant control my tears , cos my late father was singing this song and
crying in his last days in the age of 68 . This song was his childhood
song. I am adding this song to my favourites﻿

SIDHARTH IYER on Tuesday, June 18, 2013
Simple melody but sung with great voice & expression. This is the Great
Rope trick of India! It just binds one & all to the music.

Raghavendra Rao on Saturday, February 13, 2010
I was 6 yrs when this song was sung by Noorjehan, even toay all the songs
of Anmol ghadi stirs my heart...Ragu