Video of this song from youtube
Average Rating : 4.30
Total Vote(s) : 160
Please rate this song between 1 star and 5 stars (5 stars being the best). Just move your mouse on the stars above and click as per your rating. Your rating will really help us to improve our website. 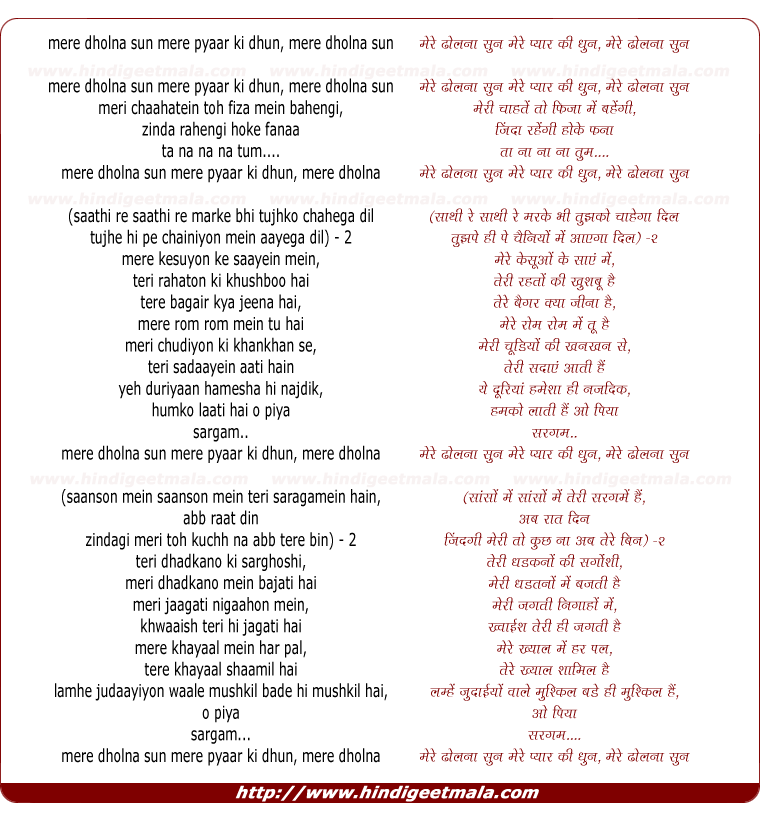 Comments on song "Mere Dholna Sun Mere Pyaar Ki Dhun"
desidol22 on Tuesday, October 05, 2010
@achzit I agree with you that bollywood movies are a step ahead but its
mostly because they have a larger audience and therefore bigger budget. But
if it weren't for a south indian movie, this movie would have never been
made. Also south indians like Mani Ratnam, Priyadharshan, K. Vishwnath, Ram
Gopal Varma make many of the Bollywood films you watch. South Indians like
Hema Malini, Vidya Balan, Rekha, Jaya Pradha, John Abraham, Aish, Deepika,
Shilpa Shetty, Sunil Shetty, Sri Devi act in bollyw

Nina Dash on Friday, May 15, 2009
The attire Vidya is wearing is very similar to Odissi attire but again not
100% Odissi. In Odissi attire the middle fan which goes beyond her knee is
there, but the the shorter fan near her waistline is not there. In Odissi
we wear a thick silver belt around our waistline which gives it an
authentic look. Another difference is that Vidya's costume is made out of
South Indian silk not the Odissi silk. Odissi costume are made out of
typical oriya sarees which are know as "Patto".

HSSP7417 on Sunday, November 28, 2010
THE SEQUEL (PART2) of Manichitrathazhu / Apthamitra /Chandramukhi / Bhool Bhulaiya has been released as APTHARAKSHAKA inï»¿ Kannada and has been a super hit and now APTHARAKSHAKA has been remade into NAGAVALLI (CHANDRAMUKHI 2) in Telegu which will release on 3rd Dec 2010 next month.Do a google search and check out the songsï»¿ and videos of APTHARAKSHAKA and NAGAVALLI .Talks are on to remake APTHARAKSHAKA into Tamil as well.
indianhoustongirl on Tuesday, June 02, 2009
I'll educate you. malayalam is a language and malayalee is what you call people from the state of kerala which is in south india. Vidya balan is malayalee and also is the man dancing in this movie. So is the director of this movie priyadarshan. Asin -girl from Guzarish is also malayalee. John Abraham is half malayalee(his dad is malayalee). Mailaika arora is half malayalee (her mom is malayalee).
Nina Dash on Friday, May 15, 2009
Sorry to intervene. being an Oriya and an Odissi Fanatic, I couldn't resist
myself. They actually did a "Khichdi" of both the dances. There are few
stances of Odissi and the head piece is partly from Odissi but the
cheoreography is more towards Bharatnatyam. It may not be a bad idea for
you to go watch both the dance style performance somehwere then you will
know the difference yourself.