Video of this song from youtube
Average Rating : 4.32
Total Vote(s) : 214
Please rate this song between 1 star and 5 stars (5 stars being the best). Just move your mouse on the stars above and click as per your rating. Your rating will really help us to improve our website. 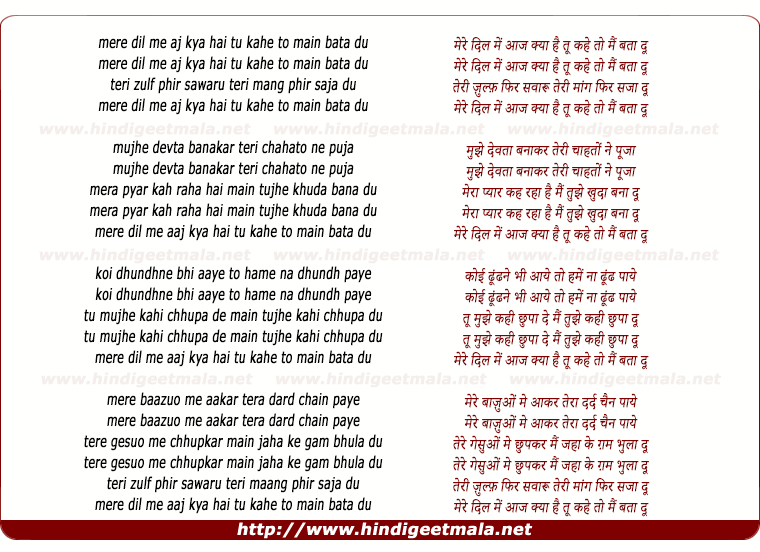 Comments on song "Mere Dil Mein Aaj Kya Hai"
lamb611 on Monday, February 07, 2011
Would love to read the sutitles. A beautiful song with my favorite singer and Actor and Actress.
MsAhmad89 on Tuesday, April 19, 2011
so so so romantic lyrics and sung by the world's finest playback singer KISHORE KUMAR
Lahoreumar on Sunday, February 27, 2011
An evocative song from the Rajesh Khanna years. The year being 1973 -
twilight of Khanna's rule in Bollywood. The Rajesh Khanna phenomenon was
almost over from the next year 1974, as the Super star became estranged to
his veteran directors - Shakti Samantha, Hirishikesh Mukherjee. His place
was gradually replaced by another sort of macho man (the angry Amitabh).
The classical pairing with Sharmila also came to an end as she married the
Nawab cricketer of Pataudi and bade farewell to Bollywood.

happybaly on Tuesday, April 28, 2009
from which movie comes this song? This song was featured in the medley of
MDK with Hrithik Roshan, Rani Mukherji & Kareena Kapoor.