Average Rating : 3.83
Total Vote(s) : 6
Please rate this song between 1 star and 5 stars (5 stars being the best). Just move your mouse on the stars above and click as per your rating. Your rating will really help us to improve our website. 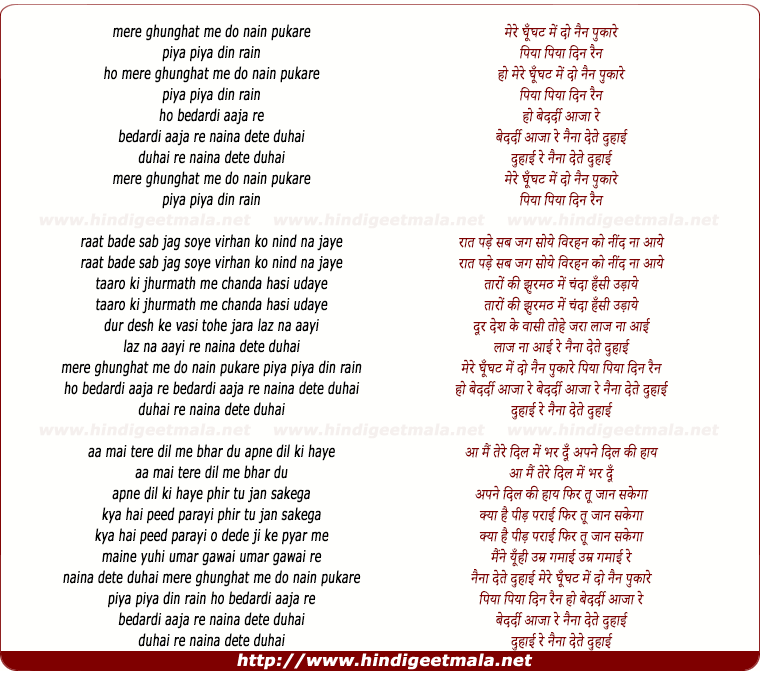 Comments on song "Mere Ghunghat Me Do Nain Pukare"
Bharat Gul on Tuesday, February 22, 2011
The articulation is so fitting in style to the modesty of the words that
one feels as if Lataji is wearing a ghoonghat (veil over her face) herself
while singing this song. When she says she studied the context of each song
to get into its spirit, I believe her from A to Z. Thanks, ajayuv.

Riaz Ali on Tuesday, February 22, 2011
Songs of 50s have no match. All are superb and enriched with beautiful
music, sublime poetry and and not to speak of singers. Thanks.

rumahale on Thursday, July 09, 2015
One more gem of a song from less heard movie.
Thank you for excellent presentation of this rare gem.﻿

dattakanitkar on Friday, November 21, 2014
Thanks Ajay for uploading this heart touching melody. Wish I could see this
film if it was at all possible or if it exists.﻿

Jagjit Singh Ishar on Tuesday, August 25, 2015
Never heard before. Another gem from the golden treasure of Vinod.﻿