Video of this song from youtube
Average Rating : 4.11
Total Vote(s) : 246
Please rate this song between 1 star and 5 stars (5 stars being the best). Just move your mouse on the stars above and click as per your rating. Your rating will really help us to improve our website. 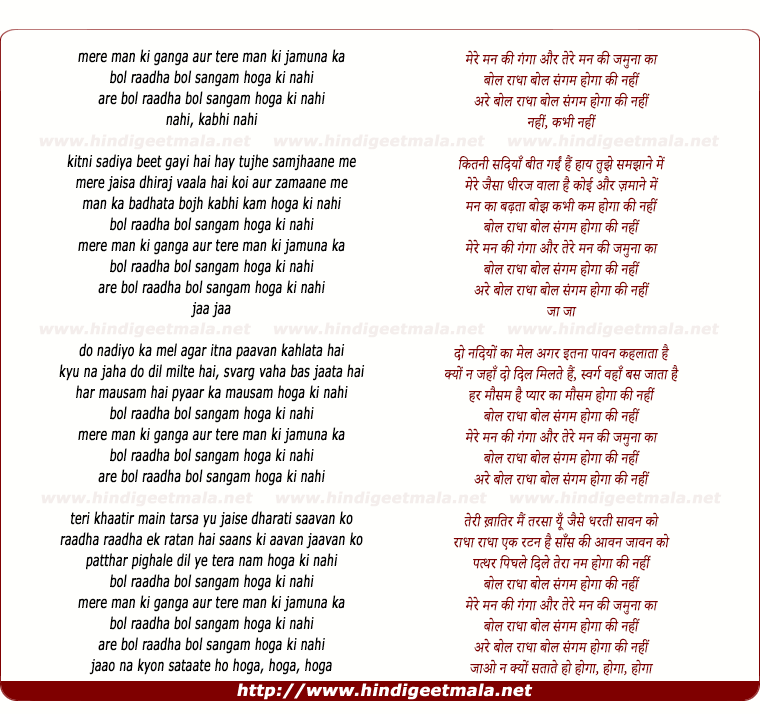 Comments on song "Mere Man Ki Ganga Aur Tere Man Ki Jamuna Ka"
dabangginception on Friday, October 12, 2012
Sangam means the mixing of two elements. Here 'sangam' is reffered to as the meeting of lovers. The first lines of the song is kinda like - 0:30 Tell me O Radha weather the river & the river of yours will confluence? So the girl says at 0:54 "NO NEVER!"
shilpa88888 on Monday, March 26, 2012
Very sweet and disgusting at the same time! :-) Vyajyanty Mala is very
beautiful. ShemarooEnt thank you for sharing this video with youtube.

asha1053 on Saturday, February 11, 2012
beautiful music by Shankar Jaikishan..Raj Kapoor and Vijayanthimala are wonderful
bawazeerable on Friday, April 13, 2012
such a melodious song charged with the most beautiful memories, memories of tender childhood and curious early adolescence. Although I never had the chance to watch this film, very unfortunately, but lucky to hear and enjoy its memorable songs especially this one. It was such a very popular song in my then little and quiet town of Mukalla. I remember hearing this song played very loudly in a small tea house by the sea that used to play for its customers only Hindi film songs. Thanx 4 the upload
DAYA DEKUMPITIYA ACHARIGE on Wednesday, November 21, 2012
I was a little kid,when this film was screened in Colombo, srilanka..I
still can remember only 1 reel was issued and this was transfered from
capitol theatre to Ritz borella vise versa to show film with 2 intervals
which I presume only longest run film lrunning time 4,5 hrs]in srilanka up
to now,Main actress Wijanthamaala too visited in Srilanka at the same
time.,very romantic,colourful,heart touching storey,