Average Rating : 4.32
Total Vote(s) : 356
Please rate this song between 1 star and 5 stars (5 stars being the best). Just move your mouse on the stars above and click as per your rating. Your rating will really help us to improve our website. 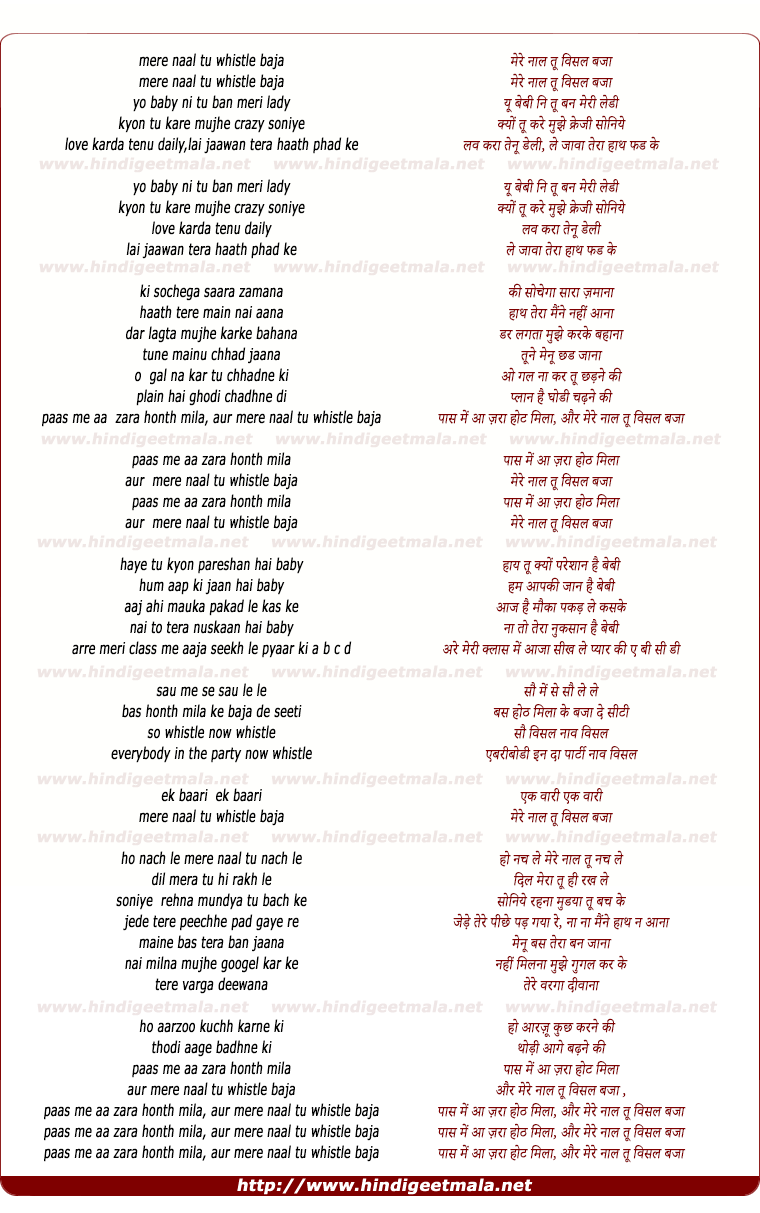 Comments on song "Mere Naal Tu Whistle Baja"
WHaAteVaA on Thursday, August 20, 2015
I'm not a big fan of Bollywood movies i watched Aashique for that famous
song liked the movie , then there i was watching IIfa awards this guy did
catch my eye while dancing after winning the award and whenever the camera
was on him he kept smiling like so purely you can tell by the smile many
things about a person after that i looked up for the movie and the movie
was unbelievably entertaining and amusing like no other movie and i was
like isn't there any other movies for this cool guy to watch i can watch
any movie that includes Tiger in if he would amuse me and keep me
entertained this much not to mention the Heroin was a perfect pair for
Tiger Shorff .don't know if any other actress could give with Tiger the
vibes she gave ??
Coolest Actor in Bollywood soo far.﻿

DaSnarky Remarky on Tuesday, April 14, 2015
Wow i can't help but feel ambivalent about this guy. While on one hand you
look at him and appreciated his dancing skills and athleticism. On the
other hand you feel so put down by another cliched Bollywood story. Another
star kid born to an erstwhile actor with a silver spoon in his mouth
gaining a surefire slingshot entry.
While that may not be his fault, it surely delegitimizes his launch. Where
is the struggle? Aspiring Indian actors with no internal connections must
all feel so depressed. Bollywood is this fiercely closed knit monopoly
where outsiders have to fight to establish themselves. Which is why i
respect SRK so much! The only man in the last 2 decades to make it big with
no connections.﻿

Rehmaan Khan Fatahu on Wednesday, April 29, 2015
Wow! Very nice song Tiger is totally rocked it with his awesome dance steps
even Kriti dancing so well in this song also Manj Musik and Nindy Kaur are
the amazing combination they are Best Punjabi Singer ever cant listening
again. Great tunes, great singer, sizzling hot pair and awesome
choreography, they are totally killed it. #Heropanti was already a hit! ﻿

coolgirl123452 on Saturday, September 27, 2014
At first I didn't like Tiger at all but now that I've watched him on screen
a couple of times he has amazing screen presence. He looks amazing and I
think he has a face that needs to get used to looking at. He looks and acts
different from all the actors now a days. He has that old actors look like
Sonakshi has. Now I think hes amazing and soo cute!﻿

Bh x on Monday, June 30, 2014
he should come in abcd2 instead of varun dhawan. varun is a good dancer but
tiger is a lot better and he should show it off all he can. after all, they
don't require brilliant acting in dance movies. I do hope he improves his
acting skills too though. hope to see him do well in future movies﻿