Video of this song from youtube
Average Rating : 4.44
Total Vote(s) : 416
Please rate this song between 1 star and 5 stars (5 stars being the best). Just move your mouse on the stars above and click as per your rating. Your rating will really help us to improve our website. 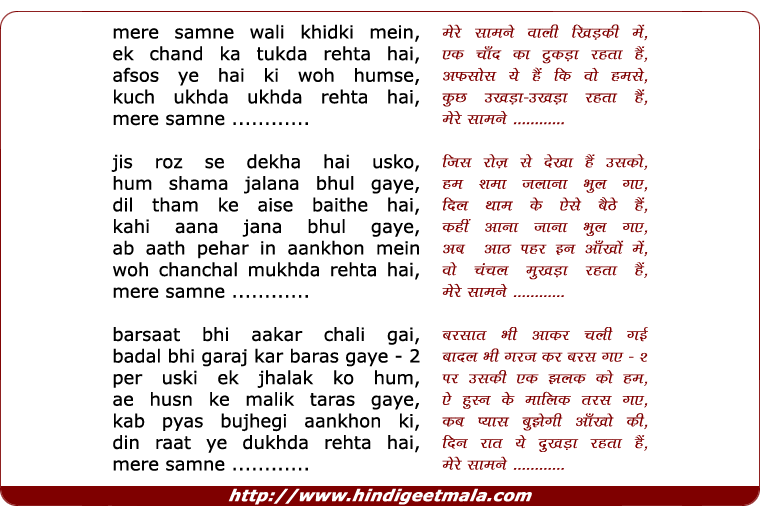 realityindian on Saturday, January 17, 2009
This is hindi, not urdu. All those words also part of hindi just as the entire grammar of urdu is derived from Sanskrit. All the verbs - kar, mar, jal, gaya, etc are Sanskrit based. Only some words are taken from persian/arabic. And even the filmmaker, lyricist, director etc all agree that this is hindi.
McChirkeen on Wednesday, January 27, 2010
This was yelled out by a couple of guys one afternoon after school in
Lahore. Both had just finished their daily muth session thinking of Saira
Bano. Saira Bano kaa phudha Dilip Kumar kaa lulla hululla Gulla.

skchettri on Tuesday, April 29, 2008
Thank you so much ..this is best song from kishore ji...i love kishore ji's voice, sunil dutt's ji acting..amazing vedio and i have watched this movie more than 20 times.made my day...thank you my yaara..
View all 255 comments related to song Mere Samne Wali Khidki Mein Ek Chand Ka
Popular Links on HindiGeetMala