Video of this song from youtube
Average Rating : 3.49
Total Vote(s) : 323
Please rate this song between 1 star and 5 stars (5 stars being the best). Just move your mouse on the stars above and click as per your rating. Your rating will really help us to improve our website. 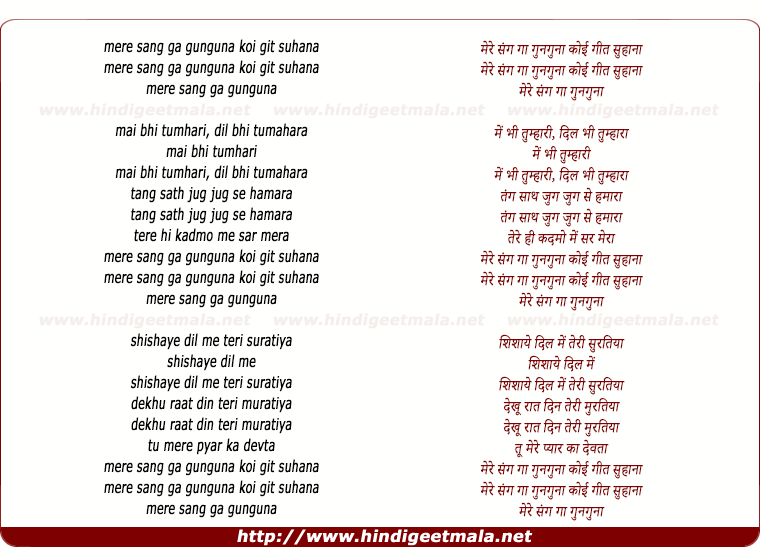 Comments on song "Mere Sang Ga Gunguna Koi Geet Suhaana, Mere Sang Gaa"
5sanjeev on Monday, February 15, 2010
Very beautiful ART from the golden years on Bollywood.
Milahi1935 on Thursday, May 05, 2011
Suman has shown her range, control and sweet voice, making this song a
masterpiece. Suman is a better singer than Lata, but the mediocre music
composers of her era could not realize her great talents. They should have
given her ten thousand songs, with high notes here and there, instead of
the paltry 740 songs that she got in her lifetime. Indian music would have
been much better if Suman had sung many more songs.

sarlata20 on Monday, July 02, 2012
Very beautiful song, sung brilliantly by Suman K.JI. Rajshree with her
classic beauty,charm & grace would have ruled Bollywood if she would not
have left film industry while climbing step by step towards pinnacle of
success.Brilliant dancer with any actor made successful films at box
office. Thanks Jemal Bhai.Thumbs Up. Always with Blessings & Respect.Sis.
Sarla.

bleachfan19911 on Sunday, May 06, 2012
To continue Sumanjis voice bears an uncanny resemblance to Lataji.But it is
not her fault.Her voice is wonderful.Why was she sidelined. Was it because
of L factor or was it because of dirty politics.Does anyone know the
answer.Thanks alot Shaambhaiyya. Bye.Take care.

Milahi1935 on Friday, May 06, 2011
sham44: thank you for posting such great music. People have almost
forgotten the great Suman as Lata worship has gone to an undeserved
extreme. I hope Suman will sing more songs as she is still pretty young.