Video of this song from youtube
Average Rating : 4.16
Total Vote(s) : 76
Please rate this song between 1 star and 5 stars (5 stars being the best). Just move your mouse on the stars above and click as per your rating. Your rating will really help us to improve our website. 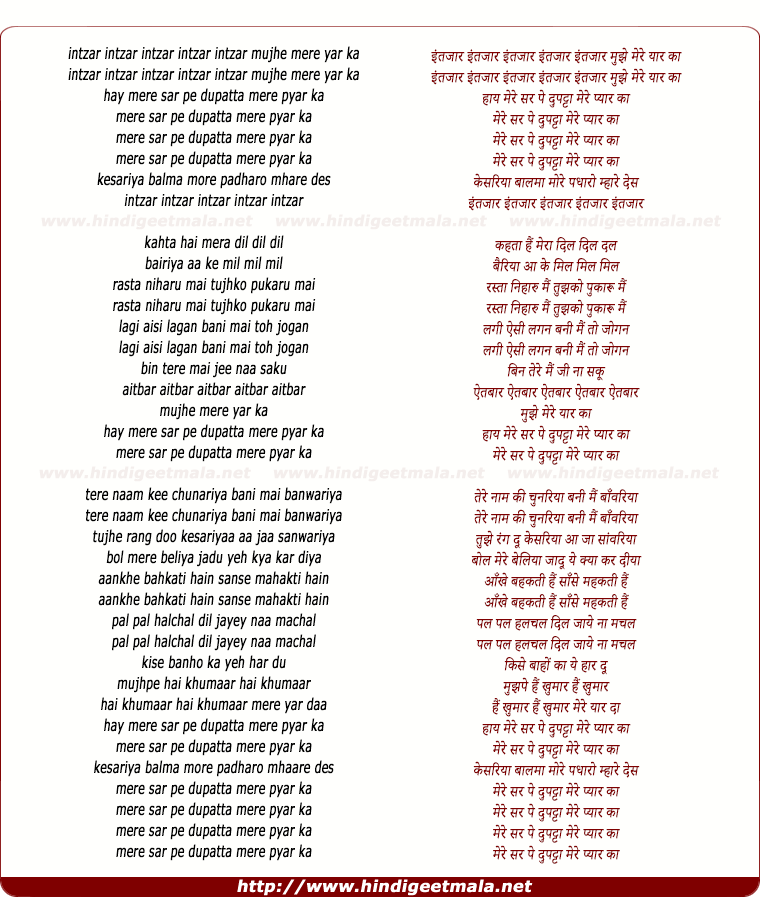 Comments on song "Mere Sar Pe Dupatta Mere Pyar Ka"
HABEEBA KHATOON on Wednesday, April 17, 2013
@arts1011 i knw evryone has thr own choice but i still dnt undrstand y ppl
wana see reality in films...you can see the reality in real than y to go to
cinema theatr to see the same suffrngs, boring routine life , the same
geographical area and the same coomon ppl on big screen tht too by payng
hunderds of rupees togethr. indian films are such (full of drama emotions
SONGS with beautiful background)coz we wana see them like tht only n wana
forget all issues prbms n suffngs atleast fr 3hrs

artsy1011 on Sunday, February 24, 2013
More recent Indian films that have been very popular in India such as Body
guard (Suggested by my Indian friend) was a ditto copy of the Hollywood
film by the SAME name lol. And you mentioned Ghajni which was also
suggested by my friend and that film too is a copy of Memento. However,
besides the point of stealing, Indian films such as Ghajini, you sit down
and you start watching it and you get into it and then all of a sudden the
characters start dancing. It breaks away from reality.

artsy1011 on Sunday, February 24, 2013
Based on my research and from what I have seen China and Japan have really
solid film industries i.e they make good quality cinema. India produces
some good solid films here and there but overall its serious film side is
overshadowed by "Bollywood" which thrives upon taking plots from all around
the world and recreating them in the name of "Inspiration" yet doesn't give
the original creators any credit.

artsy1011 on Sunday, February 24, 2013
My friend who did research with me is actually Indian himself and he told
me that when he was in India he saw many films which he loved but when he
came over to the US he was very disappointed to see 95% of them had been
copied from Hollywood movies. Korea's film industry is a perfect balance of
Commercialism and good cinema (Korea is a victim of many Bollywood
"Inspirations" as well lol)

artsy1011 on Sunday, February 24, 2013
Dont get me wrong Im a film student from New York and Im used to
criticizing films because that is what we are taught in school. I'm sure
India has produced some good films but overall its a very commercial
industry. The reason I am even here or even know about Indian cinema is
because a friend and I did research on Asian cinema for one of our classes.