Video of this song from youtube
Average Rating : 4.27
Total Vote(s) : 11
Please rate this song between 1 star and 5 stars (5 stars being the best). Just move your mouse on the stars above and click as per your rating. Your rating will really help us to improve our website. 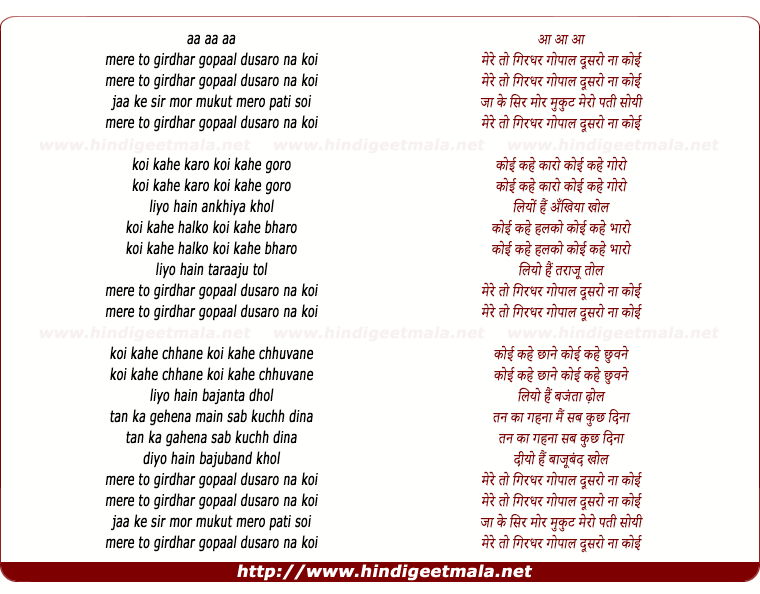 Comments on song "Mere To Girdhar Gopal Dusro Na Koi (Duet)"
mack2705 on Sunday, March 25, 2012
the translation is not written for the line " Chunari ki kiye tok..."
this means she still takes "Pallu" up to forehead beacuse the others taunts on the same(it's must for a married woman in Rajasthan) but other ornaments she has left as they are an attachments to theis mortal world. she loves the Vanmala..

jjsadhana1984 on Tuesday, April 17, 2012
thnx to the uploader... thnx for uploading all the songs from meera film...
i like the film the most.. hema malini ji has portraied meeraji so
perfect. thnx again..

Abhinav Kishore on Tuesday, June 25, 2013
what difference do capital letters mean to him, these are all grammatical
rules made up my humans! what matters is heartfelt devotion

Parantap Sharma on Friday, February 13, 2015
Meera Bai ji , Narsi Bhagat, Maharana Pratap... these people make me proud
to be born in the same sand... thats an honor in itself﻿