Video of this song from youtube
Average Rating : 4.67
Total Vote(s) : 9
Please rate this song between 1 star and 5 stars (5 stars being the best). Just move your mouse on the stars above and click as per your rating. Your rating will really help us to improve our website. 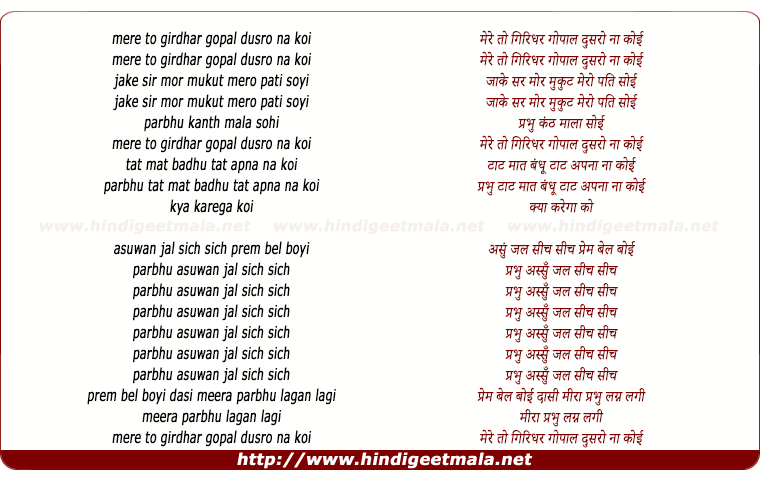 Comments on song "Mere To Giridhar Gopal Dusaro Na Koi"
samaganam on Saturday, February 25, 2012
MS amma squeezes the heart out in this song.Good that I belong to her great
grand children's generation.I am glad I did not watch this in theatre.This
is similar to "Jesus' Passion Play",I instantly want to run and hold MS
amma's feet to stop singing and not seek for krishna,But I am relieved that
this is not happening right now.Its MS amma's favourite song.She feels she
is hugging krishna's murti when she sings this,no wonder she is meera
herself.Blessed are my eyes,thanks for the upload sir.

samaganam on Tuesday, July 24, 2012
Hmm..in telugu,when you want to address someone very dear to you,you call
her chitti talli,or papam picchi talli(poor little one :-) ) and since MS
amma is our dear dear mother,I called her so :-) her children have that
right over her isnt it?

sreerama43 on Friday, December 13, 2013
It is interesting how men feel so left out when women seek God company
instead of man. But when men become sanyasi they are looked at from
reverence. Has any one took a loot at Sri Ramakrishna parmahamsa. Did
any one care to find out hos Sarada ma felt. She had no choice but to be a
saint. Men every where has exploited women. Besides those days men were
not even monogamous.﻿

taptijnu on Thursday, July 03, 2014
+Meghashyam Sandeep V
"दास मीरा प्रभु लगन लागि , होनी हो सो होइ " Meera and her lord are united
now, it was bound to happen and so it did .
My note: this seems to me an
extreme courageous line.﻿