Video of this song from youtube
Average Rating : 4.59
Total Vote(s) : 78
Please rate this song between 1 star and 5 stars (5 stars being the best). Just move your mouse on the stars above and click as per your rating. Your rating will really help us to improve our website. 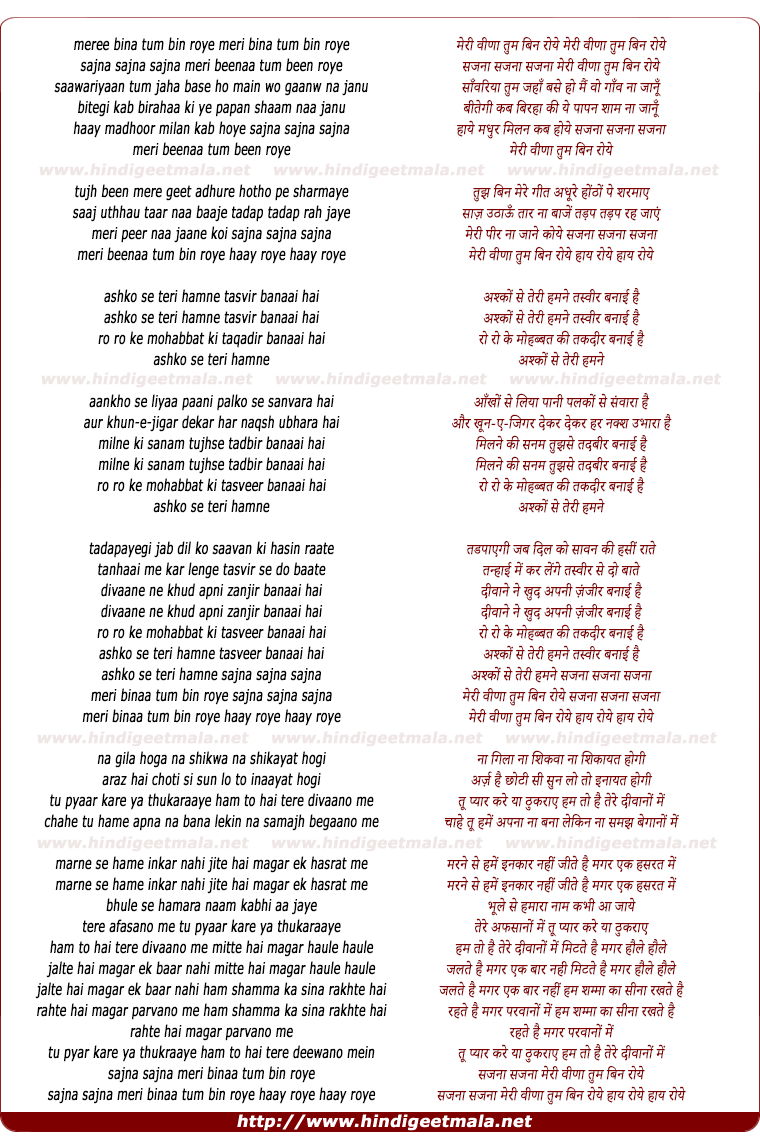 Comments on song "Meree Beenaa Tum Been Roye"
crazyoldsongs on Sunday, January 31, 2010
yes my dear yuan ,you are right . the song ends again with 'meri veena '.
when i saw that the song's length was of more than 9 mins .i wondered if it
could be possible . i have seen this movie on doordarshan ages ago but was
reminded of the picturisation after i saw the whole video till the end ,
which even i had forgotten ,and naturally you can't make out that it has3
songs otherwise.thanks for reviving my memories by posting this clip ! it
is a v unusual picturisation but is great

crazyoldsongs on Sunday, January 31, 2010
thanks yuan for this tripple treat ! this has three beautiful songs at one
go . meri veena by lata ji ,ashkon se teri hamne by asha ji , and tu pyaar
kare ya thukaraaye by lata ji , picturised on the three leading ladies of
the movie as such .

Psyche1954 on Thursday, January 06, 2011
main character is the brilliant music composition by the great Madan Mohan
who has woven all three songs in a sort of story telling continuity! of
course Lata and Ashaji are the only two who could have done justice to this
!

chandrashekharjain on Friday, October 01, 2010
Three fortunate leading ladies on whom such awesome songs have been
picturized are Ameeta, Anita Guha and Shubha Khote. Thanks for a wonderful
upload.