Video of this song from youtube
Average Rating : 4.55
Total Vote(s) : 84
Please rate this song between 1 star and 5 stars (5 stars being the best). Just move your mouse on the stars above and click as per your rating. Your rating will really help us to improve our website. 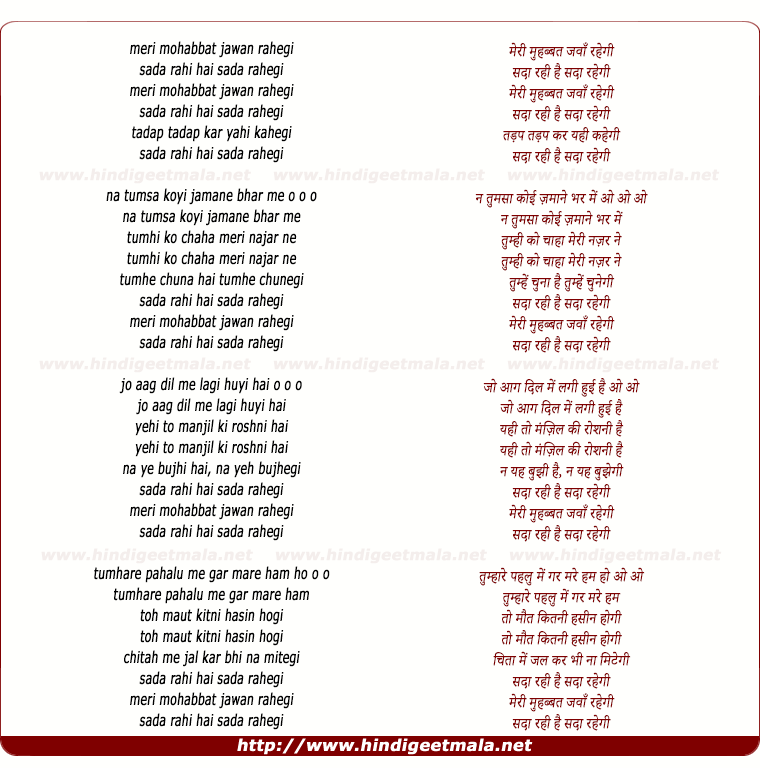 Comments on song "Meree Mohabbat Jawan Rahegee"
Awar Khan on Monday, March 02, 2015
We haven't seen or heard Taan Sen, but I have no doubt that Mohd. Rafi
would excel anyone in the past or present in melody, modulation, octave
range, variety, versatility, universality, lyric-expression,
characterization, etc etc.--the list goes on and on! I'm also positive that
the more time passes by the more precious and rare his voice will become.
He will be the Van Goff, the Picasso, the Bach from the sub-continent!
There will be a lot of research done and many Ph. D's acquired about him.
He is the Mount Everest in human voice! And there is only one Mr. Everest!
An endless, bottomless ocean of music and melody! As Lata Mangeshkar once
said, he sings in a way that a common layman understands, appreciates and
associates with him. He was the Dream Voice for all music directors. A
composer would present him with a silver vase and Rafi would return to the
composer—a gold or platinum one. Quite a few composers on quite a few
occasions said “Rafi Sahib sang far above our expectations! His songs look
so EASY to sing but when you do try to emulate, it's a different story
altogether! I grew up with his voice and used to wait—heart and soul for
his next song! I feel so fortunate to have seen him only once, three years
before his early demise! HE IS GIFT OF NATURE TO ALL MANKIND! I don't think
there will be another RAFI for EVER!﻿

V. Siddhartha on Thursday, August 27, 2009
There are lots and lots of such songs involving Shammi Kapoor, Joy
Miukherjee, Biswajeet, Sadhna, Rajshri, Waheeda Rehman, Asha Parekh ,etc.
Stunning mountain landscapes are often used as a backdrop for such numbers.
So they constitute a cinematic cliche. Yet each time the music and the
voice make all the difference between the familiar and the fresh. A
beautiful Rafi song ! Thanks, Yuan.

Vinay Hegde on Friday, April 12, 2013
Shammi Kapoor, Mohammad Rafi and the hills of Kashmir (not sure, just
guessing) - what a combination! Such a romantic song, with Rafi hitting all
the high notes beautifully. Shammi Kapoor was so mercurial and smouldering
in his romantic songs. But half the credit for his success should go Rafi.

Vishwanathan Aiyer on Saturday, October 06, 2012
A perfect match of shammi ji & Rajshree. A romantically involved movie.
Good jo shammi ji you have done. You will always be remembered as one of
the most romantic hero Indian screen evr produced. Thanks for up loading