Average Rating : 4.29
Total Vote(s) : 14
Please rate this song between 1 star and 5 stars (5 stars being the best). Just move your mouse on the stars above and click as per your rating. Your rating will really help us to improve our website. 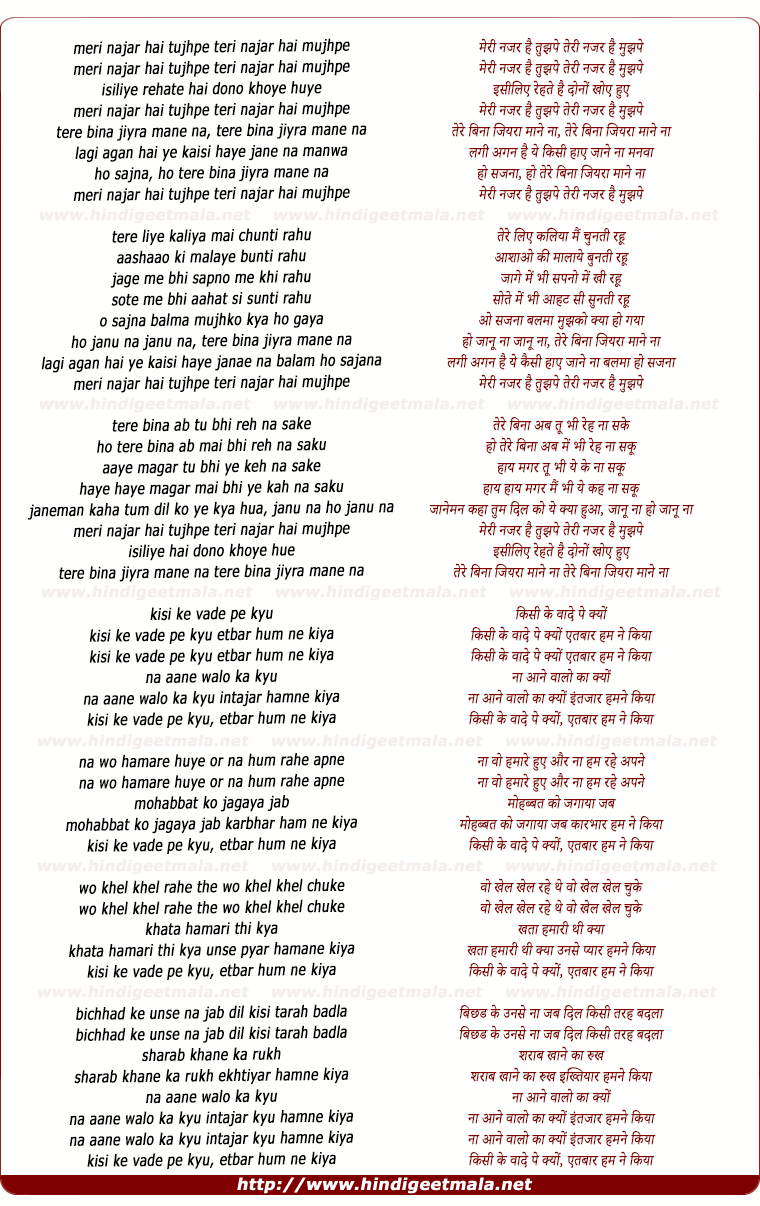 Comments on song "Meri Nazar Hai Tujh Pe"
SUDIPTO BOSE on Thursday, August 01, 2013
parveen babi is a stunner with her glossy fiery red skirt.that was 70s,we
will never see one like her.

michaelarkengel on Sunday, January 29, 2012
Whenever I see this song I am reminded of the greatness of two things, one of life and the other of of India, no other country in this planet could have come up with this astounding number, Asha is mesmerising, Parveen babi is brilliant and Hema is the Goddess, divinity personified, Watch from 3:29 onwards and particularly 3:42 where she turns her hands and sings thru her eyes,no doubt everybody in this span were totally possessed-of all thats sane, all thats beautiful, and yes all thats Indian.
Sindahouse S on Thursday, December 26, 2013
the way RD used Asha-jee's voice is not only mesmerizing but I'm still in
awe...Western & classical all in 1 package.sensual yet extremely
graceful...playback singing is NO JOKE...acting it out according to scene's
is probably the most difficult thing.maybe that's y all these winners on
shows like S, R, G, M, P or Indian idol rarely make it to the studios of
playback..lol﻿


Rahul Samanta on Thursday, December 06, 2012
Sir, I am not sure whether you are a foreigner in respect to India or
not(your name suggests maybe) but irrespective of your nationality,
whatever you have said here is the truth and I, as an Indian, respect
that.Also I would like to add one name in your list without whom this
song may not have been possible. R.D.Burman, our beloved Pancham Da.

DEBASISH NATH on Saturday, January 19, 2013
Magical combination, RD BURMAN and ASHA BHOSLE. Brilliant composition, and
sung effortlessly. See the ease with which she switches over from classical
to western singing style, simply amazing. Singers these days depend so much
on software, most of them can't sing live properly.