Video of this song from youtube
Average Rating : 4.55
Total Vote(s) : 33
Please rate this song between 1 star and 5 stars (5 stars being the best). Just move your mouse on the stars above and click as per your rating. Your rating will really help us to improve our website. 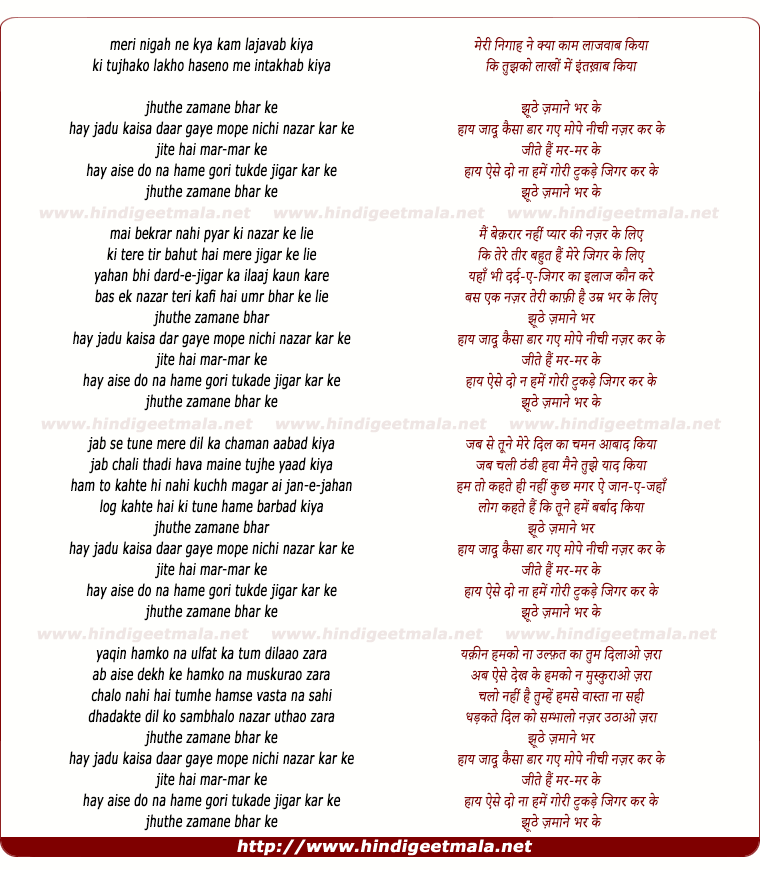 Comments on song "Meri Nigaah Ne Kyaa Kaam (Jeete Hai Mar Mar Ke)"
araniees on Saturday, May 15, 2010
These are Karan deewan & Shyama . The singar is Nirmala Devi. Famous actor Govinda's mother is also a singer by name Nirmala Devi. Can any one please cinform this singer is same Nirmala Devi- Arani Apparao-Hyderabad-A.P.
umraochalsani on Sunday, May 23, 2010
Yes, you are correct in everything. Karan diwan, Shyama, and singer Nirmala
devi. But let me know if Karan diwan was a brother Dilip kumar. I am not
sure now. There was definitely a brother of Dilip kumar, who acted in some
films. One film in Particular I remember. Nazneen, the sister of Madhubala
acted with Dilip's br. If I remember correctly, the title of the film was
also Naazneen. I am not sure of the last point.

cumrao on Wednesday, November 17, 2010
@vidursury Thank you for cor correcting me and the info. Of course Karan
dewan could not have been related to Dilip. I could recall it is Nazir khan
after you mentioned it. my memories are nearly 60 yrs old. I somehow
remembered Naazneen because I thought at that time that she was more
beautiful than Madhubala. Later I realized that it was not so. I could be
wrong in any of things I said

cumrao on Sunday, January 16, 2011
Angare has some good songs by SDB. Thank you for the info.
Popular Links on HindiGeetMala