Average Rating : 4.88
Total Vote(s) : 8
Please rate this song between 1 star and 5 stars (5 stars being the best). Just move your mouse on the stars above and click as per your rating. Your rating will really help us to improve our website. 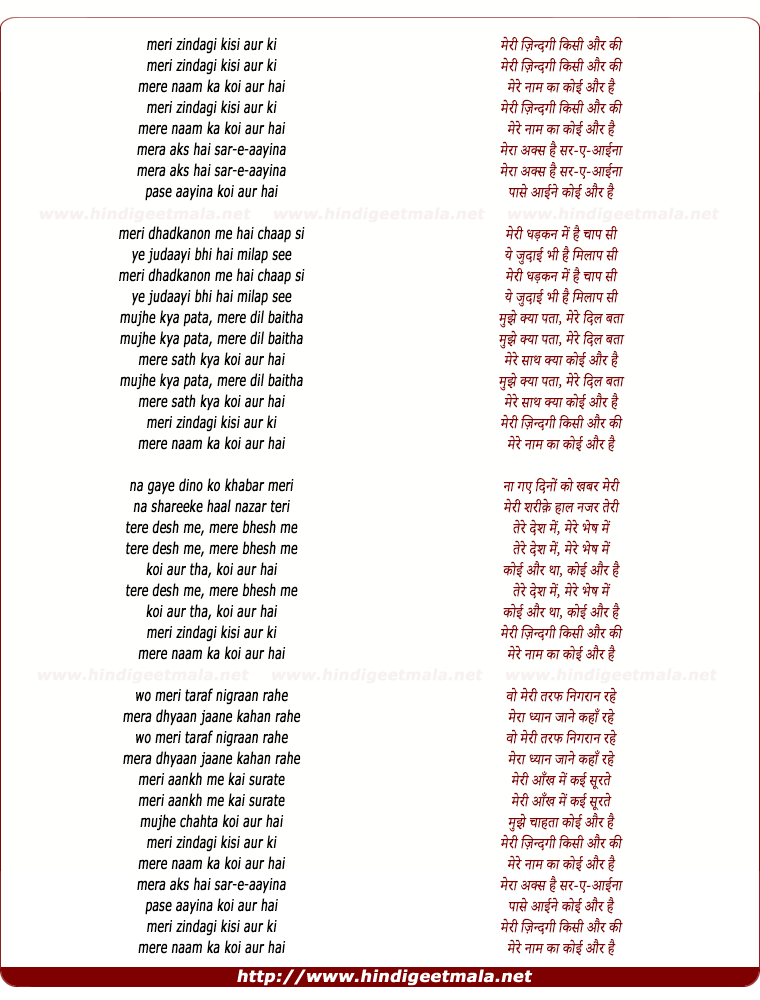 Comments on song "Meri Zindagi Kisi Aur Ki"
debasishsanyal on Tuesday, October 11, 2011
Really very sad , so soothing voice as if cools down atmosphere in summar, music arrangements,effects were equally drifting your mind into a abstraction ...for example , 'AAPNI ANKHO KE SAMUNDAR ME MUJE UTAR JANE DE ' was presented with background music of Keyboard accompanied by roaring of sea , sounds of flying ducks ...must drag to definitely to a sea beach . . Debasish Sanyal -Hyd 9903525644...May his soul be rest in PEACE .
Dipendra Singh Yadav on Monday, October 10, 2011
Look at Chitra singh .. her son met accident ,her daughter commiy suiside
and now her husband left her too ... From a happy family to all alone ...
Nature is too cruel.

Ashutosh Pandey on Saturday, December 11, 2010
MERA AKS HAI SARE AYINA , PASHE AIYNA KOI AUR HAI. (IT'S MY
REFLECTION FORTH THE MIRROR BUT BEHIND IT'S SOME ONE ELSE) .AB AUR KYA BOLE

Rajnish Bharti on Monday, October 10, 2011
This album was a tribute to their son. What an accident, I was there on
that fateful day at Marine Drive just after the accident.