Video of this song from youtube
Average Rating : 4.46
Total Vote(s) : 24
Please rate this song between 1 star and 5 stars (5 stars being the best). Just move your mouse on the stars above and click as per your rating. Your rating will really help us to improve our website. 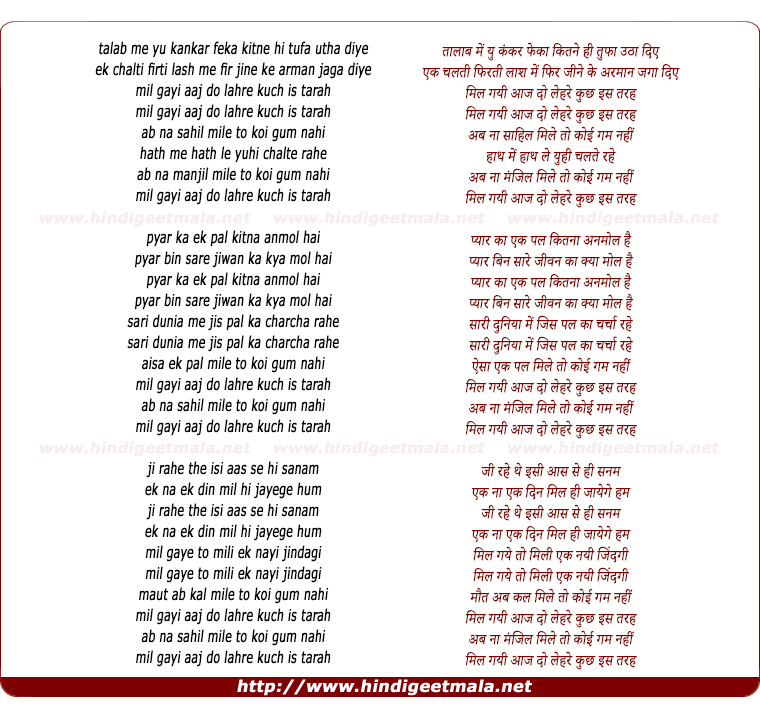 Comments on song "Mil Gayi Aaj Do Lehre Kuch Is Tarah"
Big Daddy C on Friday, August 03, 2012
First to leave a Comment, & my Comment will live on for a very long
tyme."Y"? b/coz every 9igerian who watched this Classic movee (Yeh Vaada
Raha) n d early 90z & listened to the Beautiful SAD song (Mil Gayi Aaj Do
ja ), will alwayz knw dat,There is Sometin n-Side this Movee that is Soooo
StroooonG!! & that is LOVE,...Alwayz Cherish wot u ave.

Nur Shaheerah on Wednesday, October 17, 2012
Okay, so I was just thinking that if Yeh Vaada Raha was remade. With the
same storyline. Except with the current generation of actors. So who best
suits Tina Munim's role, Poonam Dhillon's role and Rishi Kapoor's role. I
feel that Ranbir Kapoor should step in his father's shoes, then Priyanka
Chopra plays Sunita before the accident and Katrina Kaif plays
Sunita/Kkusum after the accident. What do you think? Do suggest

sunshine2049 on Thursday, February 20, 2014
I am an Italian American that fell in love with this movie in the early
80's and I cant stop watching it. It makes me feel like I want to be in
love again! Sadly, I don't get the full pleasure since I don't fully
understand the words. can someone please translate them? thanks﻿

ONKAR SINGH BATRA on Saturday, September 28, 2013
It is also my favourite movie, i do not know whether anybody knows, that
this is the remake of the english and very famous movie and novel by
danniel steel " THE PROMISE", excellent romantic movie, of course both of
them..

hooraaye2 on Tuesday, August 12, 2014
This is the movie I have seen the most ever. It represents the height of
story telling. Every move and every sound is loaded with meaning and
nuance. There should be a Hollywood remake if there is not one already.﻿