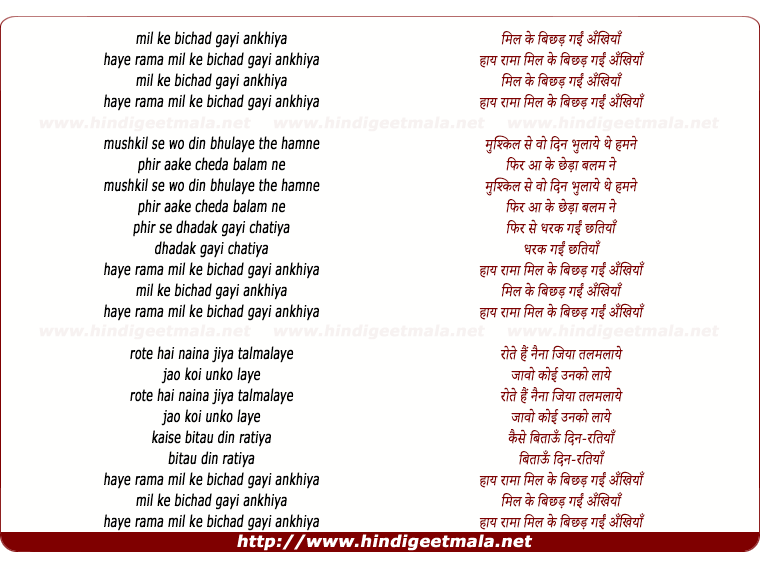 Comments on song "Mil Ke Bichhad Gayi Ankhiya"
mastkalandr on Thursday, March 22, 2012
Friend !.. You are welcome.. Well said ,Ratan was super duper hit ..,
Naushad was in the lime light .,& was on lips of every music lover.., His
songs will remain forever with us n our generations.. Thanks for sharing
this timeless classic ..

Vasant Pusalkar on Thursday, March 22, 2012
Thanks Mastakalandrji for uploading a beautiful and good quality video.
This was Naushad's first super hit film. All the songs were very good.

TUFAIL HEERA on Saturday, February 11, 2012
What a mind-blowing heart touching sad song, brilliant masterpiece with
superb great lyrics. Thank you so much for outstanding upload.

mastkalandr on Tuesday, June 18, 2013
Indeed a true story .., Thanks my friend! for sharing the interesting part
of life of the Gr8 Naushad Ali ..

Umesh Sontakke on Tuesday, June 18, 2013
Thanks a lot! I recall reading that even in marriage of Naushad Mian these
songs were played but he was not able to tell this as it was considered
beneath dignity to work in films in those days!