Video of this song from youtube
Average Rating : 4.23
Total Vote(s) : 31
Please rate this song between 1 star and 5 stars (5 stars being the best). Just move your mouse on the stars above and click as per your rating. Your rating will really help us to improve our website. 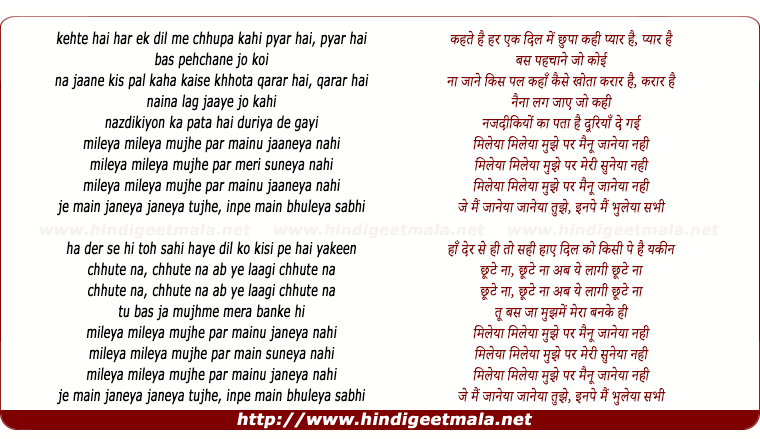 "They say there's love hidden somewhere in every heart, one just needs to
discover it..."

Check out #Yudi and #Aanchal in the exclusive new song from #HappyEnding﻿,
#MileyaMileya!

Gaurav Verma on Tuesday, December 23, 2014
I can make much better video of this song. However the Music is amazing,
Rekha Bhardwaj, Priya Andrews and Jigar Saraiya. When i heard this song I
thought its an another A.R Rahman Sir composition, but it was not.. Nice
song, Nice and original music..﻿

Malini Rajendra on Tuesday, August 04, 2015
What a song...the composers Sachin-Jigar have a great future.actually heard
this song first time from the voices of Yumna n Niharika of Indian idol
junior2﻿

shaik karimulla on Friday, December 12, 2014
i love this song so much a song sunese mere lover sriaj mujko bohat yaad
aathi i miss u so much siraj iam sorry i love u so much thu mere jann ﻿