Video of this song from youtube
Average Rating : 4.22
Total Vote(s) : 146
Please rate this song between 1 star and 5 stars (5 stars being the best). Just move your mouse on the stars above and click as per your rating. Your rating will really help us to improve our website. 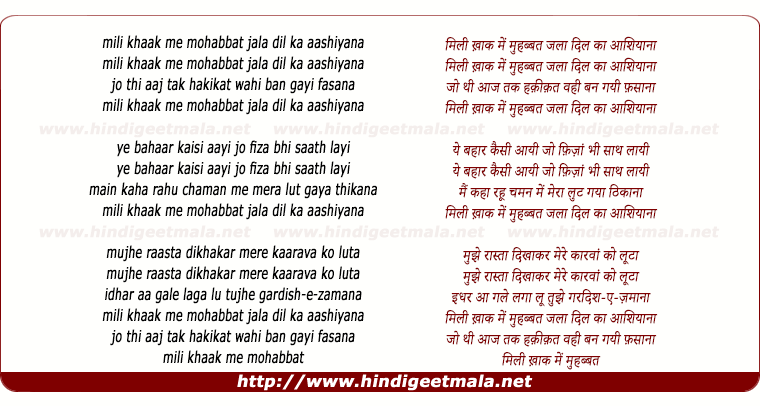 PONNADA SRINIVASPRASAD on Sunday, September 01, 2013
Only Rafi sir could/can venture such Ghazals, songs and put any scale of 1
to 20 points, Rafi occupies almost 15 points and others start from 16th
point and what else. Entire credit for the song should go to Rafi and GURU
DUTT saab simply moving lips and still grabs all awards

Mani Menon on Tuesday, May 07, 2013
Thank you, mere dost for this upload. One has to have seen this movie to
truly appreciate the shock, the guilt and the hopelessness of Guru Dutt's
character when he realises that he has married a beautiful girl by default.
His best friend had wanted to marry her.

rumahale on Wednesday, February 18, 2009
Guru Dutt had a great skill in choosing the plot and characters; he made a
good Director besides excelling in acting. Really it is a serious movie.
Thanks for the deep interest.

dsouza18 on Wednesday, February 18, 2009
what a wonderful song !!! and what nice lyrics !! indeed marvellous and
painful song associted with real life . u have a good choice of upload !!!