Average Rating : 4.12
Total Vote(s) : 49
Please rate this song between 1 star and 5 stars (5 stars being the best). Just move your mouse on the stars above and click as per your rating. Your rating will really help us to improve our website. 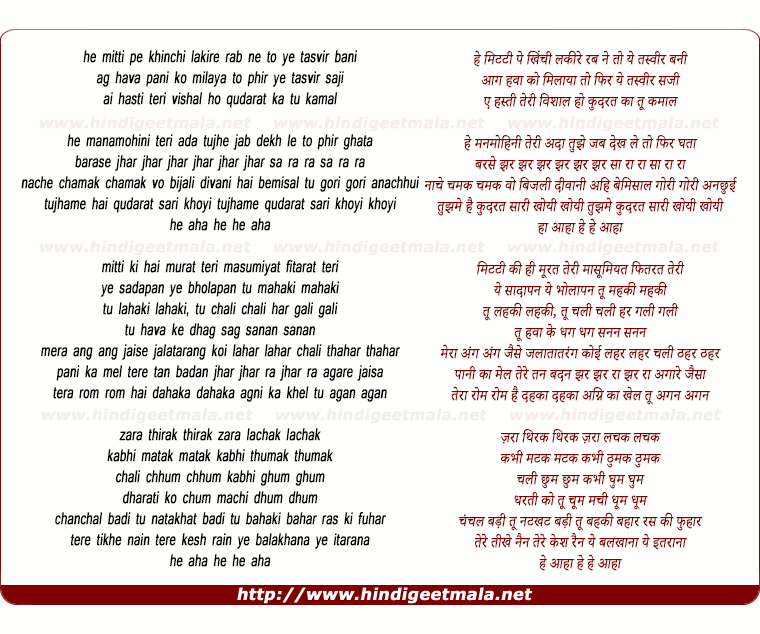 Comments on song "Mitti Pe Khinchi Lakire Rab Ne To Ye Taswir Bani"
Ddave on Sunday, June 24, 2012
I agree, Sushmita who used Ambani for lot of things and could never act as
gracefully as Aish, Rani is a great actress but yes in her personal life
she hasn't maintained herself that well and Katrina... oh god,she's only
used Salman to get to this industry but I guess Salman deserved it. But I
totally agree, Aish just doesn't have a great luck with media. It doesn't
matter because, in the end people know her globally, cuz of her Oprah was
in India and visited her house over SRK etc. She's a gem

globalcitizenn on Tuesday, May 08, 2012
Ash has played the young indian village women so well...free spirited,
athletic, independent and vocal until tradition puts the burden of family
honour on them... she has portrayed nandini in hddcs and sujata in guru so
well...i have known women in the village like that...

sabbirsa on Wednesday, July 06, 2011
aishwarya was so beautiful back then. she had this softness and innocence in her. The media really got out the worst in her and they deserve it. they have been harassing this lady for far too long.
Ddave on Saturday, June 23, 2012
how can anyone ever hate this beautiful, graceful and great humble human
being. I have met in person and Aishwarya is the most intelligent,
dignified and a down to earth person. She's a gem!

Ddave on Saturday, June 23, 2012
I agree, ever since salmaan thing everyone has got to her neves. People
make mistake, and her mistake was to be with Salman who has taken many
other women for a ride.