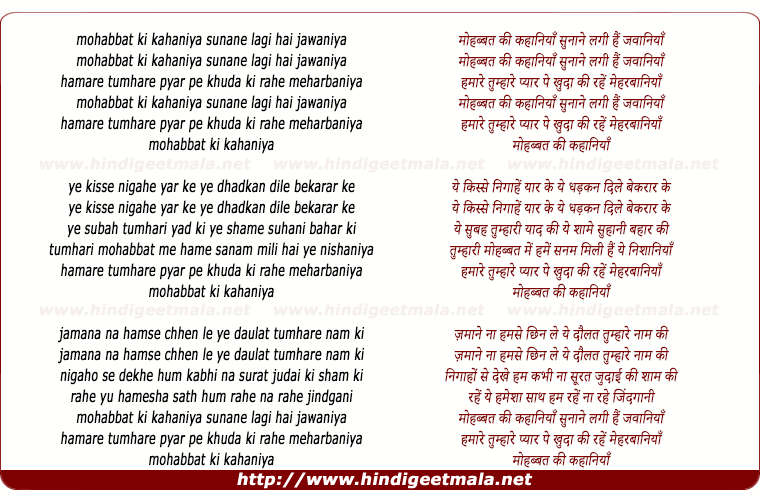 Comments on song "Mohabbat Ki Kahaniyan"
RealMusicKing on Wednesday, June 02, 2010
Talatsaab had a very unique, vibrant and fragile voice which was second to none in the entire world. It needed proper care. Talatsaab made a wrong turn. He started acting where at times, he had to yell and scream. Hence, his vocal cords were damaged. Bombay studios dust also contributed deterioration to his voice.

RealMusicKing on Wednesday, June 02, 2010
There is a full middle stanza missing in this duet sung by Lataji:


RealMusicKing on Wednesday, June 02, 2010
Lifeline771. Thank you very much. I've been looking for this since a long time. What a romantic song.
Jagjit Singh Ishar on Wednesday, March 12, 2014
Talat Mehmood's career graph ascended during 50s singing for the top
ranking heroes viz Devanand, Shammi Kapoor, Dilip Kumar Sunil Dutt Bharat
Bhushan & others. He sang the best for the leading composers like Khayyam
Shanker JKishen O P Nayyar, MadanMohan, Salil Choudhary S D Burman Anil
Biswas, Chitragupt, Naushad GH Mohd & others. But his graph declined since
60s due to the changing trend of music & taste of the people. The more
popularity & versatility of Mohd Rafi & Mohinder Kapoor also effected &
this legend could not keep pace in the changing scenario. Various heroes
refused to take playback of Talat as many songs were rerecorded with other
singers. But what ever the facts may be his repertoire is still a milestone
& as a legacy for the coming generations & the music world.﻿


Jagjit Singh Ishar on Wednesday, May 26, 2010
@vintagemelodies i agree but the effect on mohd rafi was partial despite
kishor getting major amplitude the music directors did revered rafi who
even then sang 4 the top heroes during this phase. career of talat abruptly
declined 2 standstill with no work. may b his vocal chords getting fatiqued
du 2 ageing loosing that punch. but his songs of 50s r marvellous
vindicating his legacy. i have good collection of talat & oftenly listen
when i m far from the madening crowd. my salutes 2 talat sahib.