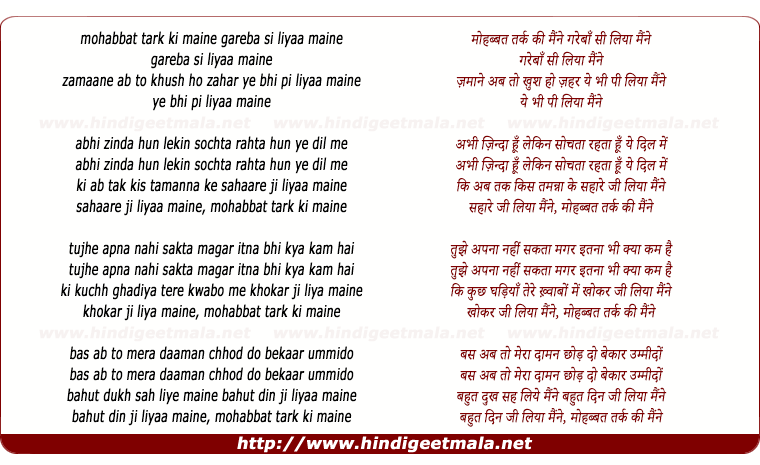 Comments on song "Mohabbat Turk Ki Maine"
RealMusicKing on Wednesday, November 02, 2011
Mohabbat Tark Ki Main Ne was written by Sahir Ludhianvi. Possible he took it from Jan Nisar Akhtar or Majaaz. Majaaz was not from Lucknow but from Faizabad, near Lucknow. He died in 1955.
RealMusicKing on Wednesday, November 02, 2011
From right to left, Talat Mahmood, Meena Kapoor(Anil Biswas' second wife), Anil Biswas, Naushad and Lata.
Moid Hasan on Friday, September 23, 2011
Mirza Sahib pl,rectify, there are 3 lyricists in Doraha 1952,Cast
Shekher,Nalni Jawyant,Aga,Murad,K.N.Singh,Produced by Progressive
Pics.Composed by Anil Biswas,Directed by Bal Chhabada(whom you mentioned as
song writer(that too is Chhabada not Chabra) Lyricist no 1-Josh Malihyabadi
No 2 Prem Dhawan No3 Sahir Ludhianvi .The song in question or uploaded by
you ,penned by No 3,one i,e Sahir.The lyricist Sahir has lifted Mukhra
---Mohabbat Tarak ke mein ne--,from Majaz Lucknavi. thanks

VeeJay on Sunday, June 27, 2010
Thank you Mirzaji, There will never be another talat. There are many Md
Rafi's, Mukesh's and Lata's,but no Talat!!! I have this song on my casette,
but this is a better sound quality. Good this about the computer sound, it
never gets distortion from overuse. Thank you again.

Moid Hasan on Wednesday, November 02, 2011
@RealMusicKing Majaz always used to add Lucknawi after his name and he was
contemporary of my father.Majaaz birth place is Lucknawi ,to the best of my
knowledge.thanks