Video of this song from youtube
Average Rating : 4.45
Total Vote(s) : 1260
Please rate this song between 1 star and 5 stars (5 stars being the best). Just move your mouse on the stars above and click as per your rating. Your rating will really help us to improve our website. 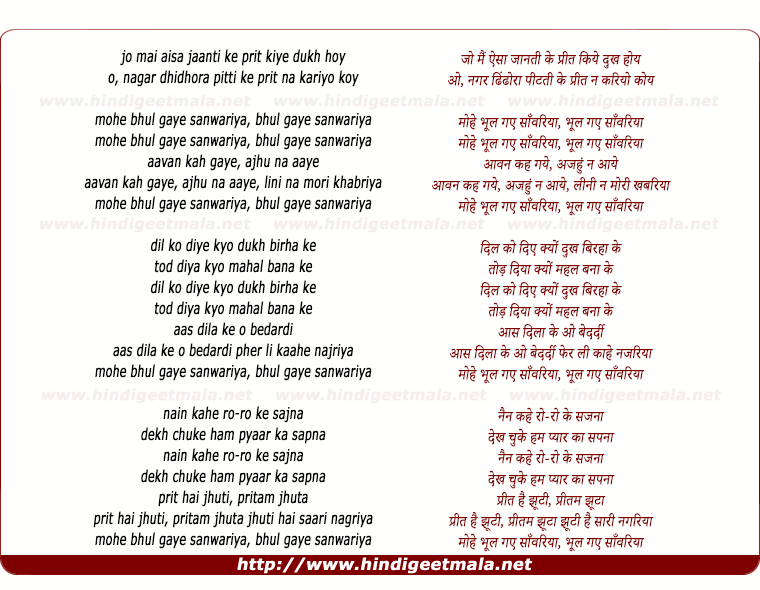 Comments on song "Mohe Bhul Gaye Sanwariya"
Odysseus on Saturday, August 09, 2008
There isn't much difference between urdu and hindi: they are basically like
two dialects of the same language. in fact rajasthani or harianvi is more
different from hindi than urdu is from hindi; although surprisingly the
first two are considered dialects of hindi. Hindi and Urdu has almost
identical grammar, they only differ in the vocabulary. Urdu uses a lot more
Persian and Arabic words.

kqs92 on Monday, July 21, 2008
I do am reading between the lines, what you seem to be pointing at, by reciting these lines of Urdu language literature, but the sad thing is that you two wonÂ´t be able to solve your argument just by such gimmicks. I just advocated the cause by simply translating it. Almost all languages, more or less, are having similar expressions for more than one meaning.
kuckudk on Monday, July 21, 2008
you did not notice the comments given by poissondelamer on this beautiful
hindi song.He is very proud of his love for URDU but doesnot seem to be
having reasonable knowledge of URDU. you check all his comments on this
song. i had asked him to tell me the meaning of this couplet to check his
knowledge of urdu.


Deb Mukherji on Tuesday, August 31, 2010
this song is based on the raag "Bhairon", which is supposed to be a raag
for dawn. It required the genius and daring of the great Naushad to use it
in an evening setting in this movie. We can only wonder at his brilliance

kqs92 on Sunday, July 20, 2008
Dast: Haath
Humne apne yaar ko haath se khaana khilaya
I fed my beloved food with my hand.
Pyas: thurst
Pesh: to offer
Aab:water
When he got thursty, I offered my beloved water.
Whats the big deal about it?