Video of this song from youtube
Average Rating : 3.17
Total Vote(s) : 6
Please rate this song between 1 star and 5 stars (5 stars being the best). Just move your mouse on the stars above and click as per your rating. Your rating will really help us to improve our website. 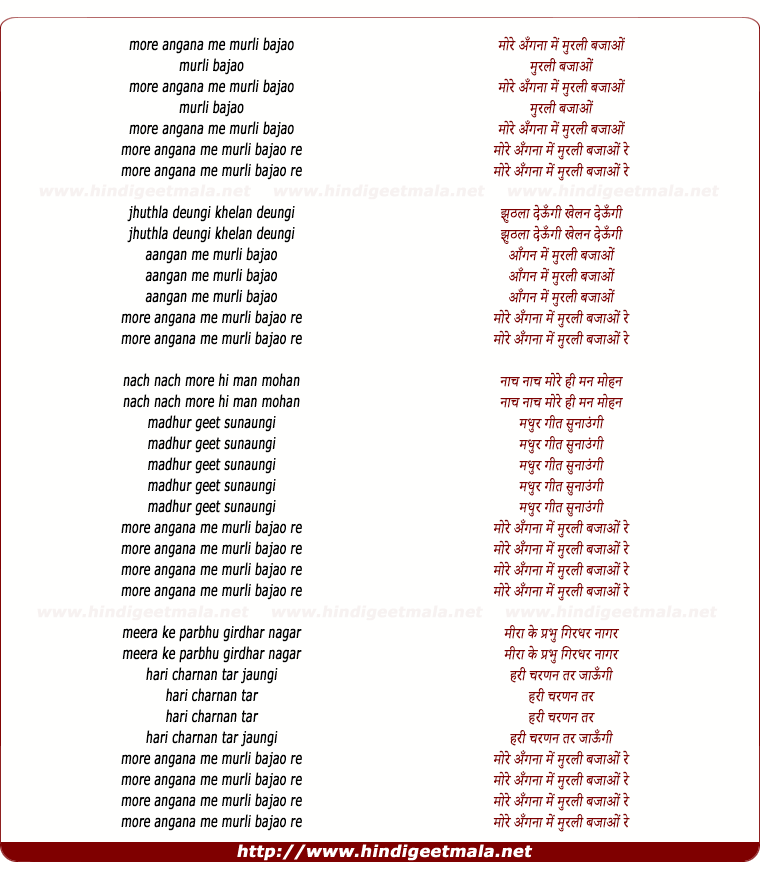 Comments on song "More Angana Me Murli Bajao"
Bharat Gul on Monday, June 06, 2011
The peerless doyenne of Carnatic music, MS also sang many north Indian
bhajans in her golden style. Lataji and MS both have received the Bharat
Ratna award, the ultimate civilian state honor in India. No wonder both are
adored by millions, MS also by Lataji herself. One of her bhajans was used
in Richard Attenborough's film Gandhi because Gandhiji also loved her
hymns.Thanks, Ajay.

Bharat Gul on Friday, January 18, 2013
After so many years I am uncertain now, but it might be Raghupati Raghav
Raja Ram, probably at the end. I am recalling from a hazy memory now.

Manoj Gundanna on Friday, July 08, 2011
this song is not from the Hindi movie Meera that was released in 1947. This
must be one of her private discs she cut for HMV in the 40s. There are many
Hindi, Punjabi Bhajans sung by her in 78 RPM disc. Usually they were
printed as Hindistani Bhajan on the disc. The Director of Meera is Ellis R
Duncan.

saz9297 on Tuesday, June 07, 2011
what a nice song. classic. never heard before even singer's name thank you
dear mr ajay