Video of this song from youtube
Average Rating : 4.60
Total Vote(s) : 68
Please rate this song between 1 star and 5 stars (5 stars being the best). Just move your mouse on the stars above and click as per your rating. Your rating will really help us to improve our website. 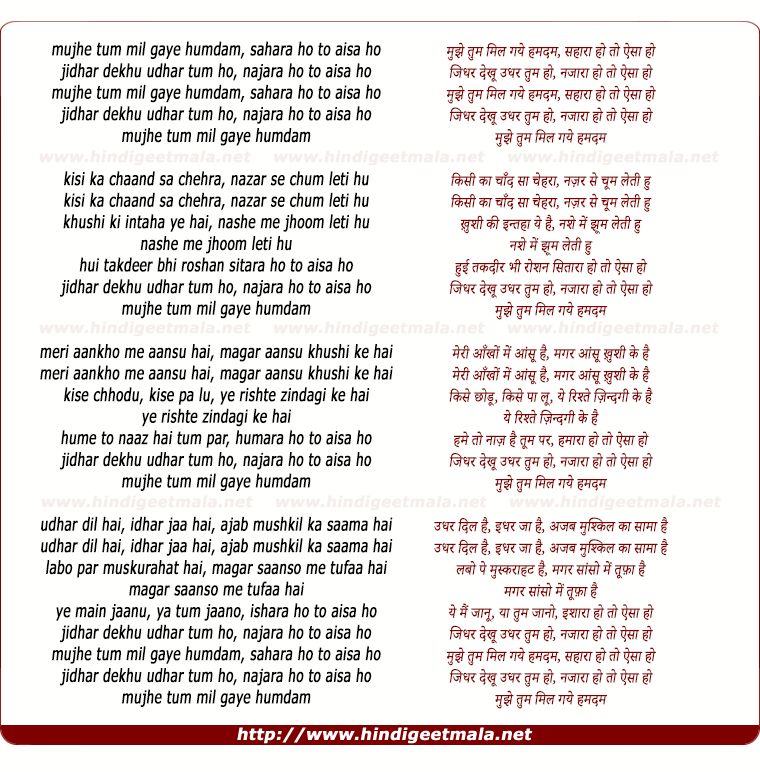 Comments on song "Muje Tum Mil Gaye Humdam"
gbolagun on Wednesday, September 17, 2008
here is a major contribution of Bollywood to the music world. great music from a lovely film. thanks for uploading this great song, Rejshri.
P.K. ANILKUMAR ( HINDI MELODY BYTES ) on Tuesday, September 15, 2015
What a melodious song!! Lata's voice is absolutely divine in this
song...This is the most melodious song. Asha Parekh looks gorgeous. She
was the most beautiful actress of 1960s. There are many movies to her
credidt..

alemoh on Wednesday, September 03, 2008
I totally love Asha Parekh. She was to me a legend. As her acting was amazing and she is a versatile actress. Love her dancing to all types of music. She really lent herself well to traditional roles as well as contemporary stylish characters. All was believable.
alemoh on Friday, October 03, 2008
Asha Parekh was one of the best dancers, from classical to contemporary dances. Pure perfection. She was also the most versatile actress, interpreting traditional or contemporary roles. She is a true Bollywood Icon.
View all 124 comments related to song Muje Tum Mil Gaye Humdam
Popular Links on HindiGeetMala