Video of this song from youtube
Average Rating : 4.38
Total Vote(s) : 71
Please rate this song between 1 star and 5 stars (5 stars being the best). Just move your mouse on the stars above and click as per your rating. Your rating will really help us to improve our website. 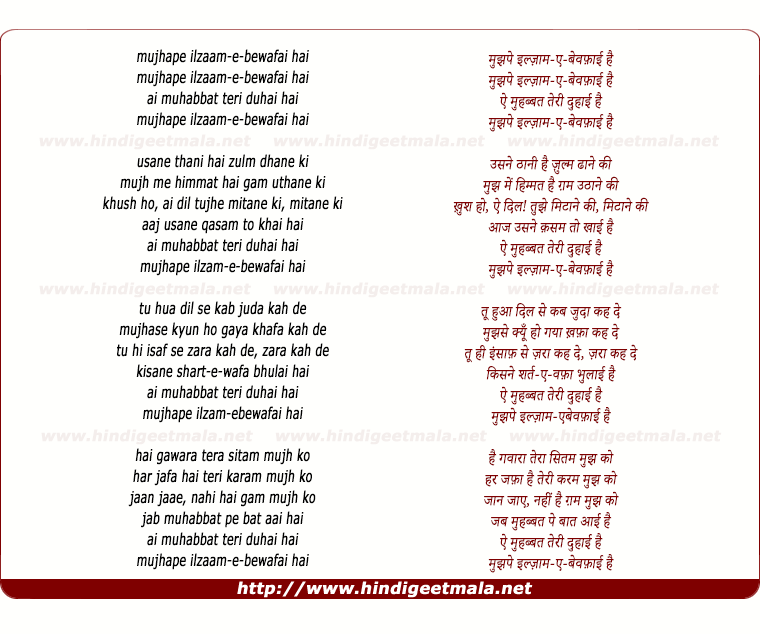 Comments on song "Mujhpe Ilzaam-E-Bewafai Hai, Ae Mohabbat Teri Duhai Hai"
Mohammed Ahmed on Wednesday, July 09, 2014
One very important feature of composer C Ramchandra's music is the rhythm.
He never allowed it to dominate the voice of the singer or the main song.
Some Music Directors especially OP Nayyar used to provide heavy rhythm
to popularise songs. I think that really takes listeners attention away from
the main song itself.
' MUJH PE ILZAM-E-BEWAFAI HAI ' is an excellent example of CR's rhythm
that has enhanced the beauty of the song. ﻿

Surender Bhutani on Thursday, March 20, 2014
What a song! Anna Ramachandra was superb and so was Jan Nissar Akhtar.
Jan Nissar wrote very profound words.As a lyricist Jan Nissar did not get
his due but he was a good poet.

Surender Bhutani on Sunday, May 11, 2014
This kind of song you can compose when you are deeply in love. That is what
had happened to C. Ramchandra.