Video of this song from youtube
Average Rating : 4.42
Total Vote(s) : 31
Please rate this song between 1 star and 5 stars (5 stars being the best). Just move your mouse on the stars above and click as per your rating. Your rating will really help us to improve our website. 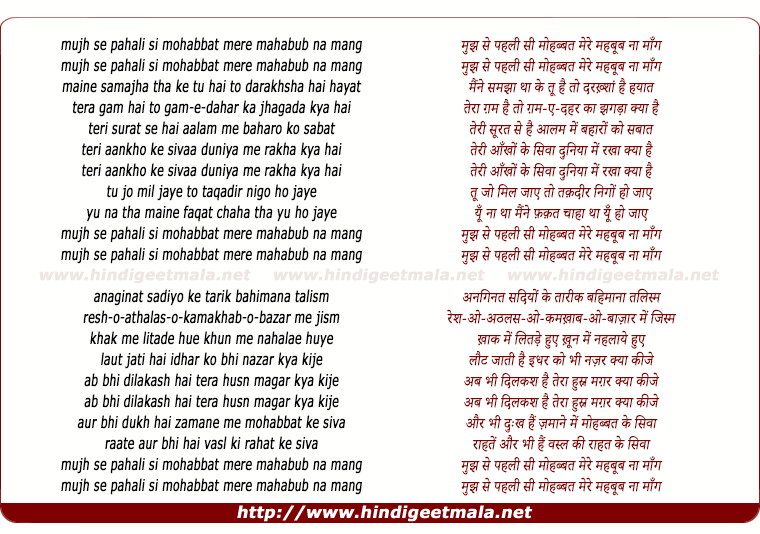 Comments on song "Mujh Se Pahali Si Mohabbat Mere Mahabub Na Maang"
Zil Hasnain Kazmi on Saturday, October 30, 2010
If I am not mistaken, and I am not overshadowing your liking and disliking
of your choices.O listners of the melodious music lovers, don´t you think
that this is the only and only ghazal in this subcontinent which has set a
world record. Late Rashid Attre has made it immortal. Word
beautifull,gorgous, excusite,terrefic, marvelous doesn´t satisfy the inner
feelings. The melody queen Late Noor Jehan sang this Ghazal in such a way
that no one can ever reach to her hight.(30th Oct.2010)

Jagjit Singh Ishar on Friday, March 12, 2010
i hv hardly cn sm pak movies on ptv. tho technically musically & frm other
aspects they r lagging byond bollywood but sm songs r so sweet & melodious
that they always revereberate in the minds. this song of noor jahan is very
melodious & xlntly sung. so nice upload.

TalatFifties on Thursday, August 02, 2007
I have watched this several times. I had heard this song on radio and had
never seen it. Thanks for uploading, it is one of my most favorite songs.
Each verse from Faiz saheb is a gem!