Video of this song from youtube
Average Rating : 4.52
Total Vote(s) : 54
Please rate this song between 1 star and 5 stars (5 stars being the best). Just move your mouse on the stars above and click as per your rating. Your rating will really help us to improve our website. 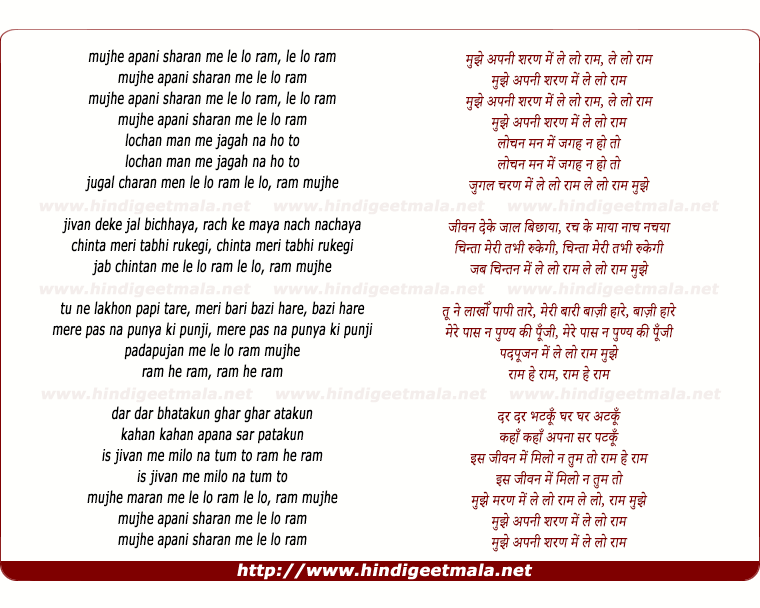 Comments on song "Mujhe Apni Sharan Me Le Lo Ram"
rekhalalit on Friday, May 07, 2010
Rafi Sahab's voice is the sweetest voice in this world . We cannot compare
it with any other voice . Once again I wish to say that there is only One
MOON , One SUN & One MOHAMMED RAFI SAHAB in this world . He is always &
everytime Genious . After listening his Bhakti Songs we can say that he was
not related to any particular religion . He was real human being in this
world . Woh INSANIYAT Ke sachche bhakt thhe . Rafi Sahab you were , you are
& you will be always Great .

MrDSOLANKI on Monday, December 27, 2010
Rafi was a true singer with a gift .The biased coments I read.just disgust
me. A singer has nothing to do with your fantasies about religions.He even
attempted singing in English.A real gentlemen with no relegious
boundaries.One can say a person with respect for all.Bless him for all his
and and his backers magic we are complementing.If he were to be alive he
would still be residing in secular India without any discrimination for
anybody.

suniloldbolywud on Wednesday, October 24, 2012
All those talking about religion have nothing to do with Rafi saheb he was one of the finest human beings he could sing Bhajans,Mulsim nat,Pujnabi Gurbani,Bengali Maa Puja.You cannot hide him in one religion.because he was above all religions. Even on his last day he was to sing for "Durga Puja " people coming from kolkata though he was not well but since he had given commitment he did not refused. Such was his dedication and commitment.
aceji on Sunday, May 24, 2009
doha states -in this glittery world, I am on unstable feet. if I fall it
must be on your feet ,and having fallen it must be you ,Lord ,who picks me
up.

wlckedne55 on Thursday, January 14, 2010
Bhagawan do give inspiration to such a singer whom touches heart of the world...Thanks to aceji for translation of Doha and ibaboeram for d/load
View all 26 comments related to song Mujhe Apni Sharan Me Le Lo Ram