Video of this song from youtube
Average Rating : 4.38
Total Vote(s) : 104
Please rate this song between 1 star and 5 stars (5 stars being the best). Just move your mouse on the stars above and click as per your rating. Your rating will really help us to improve our website. 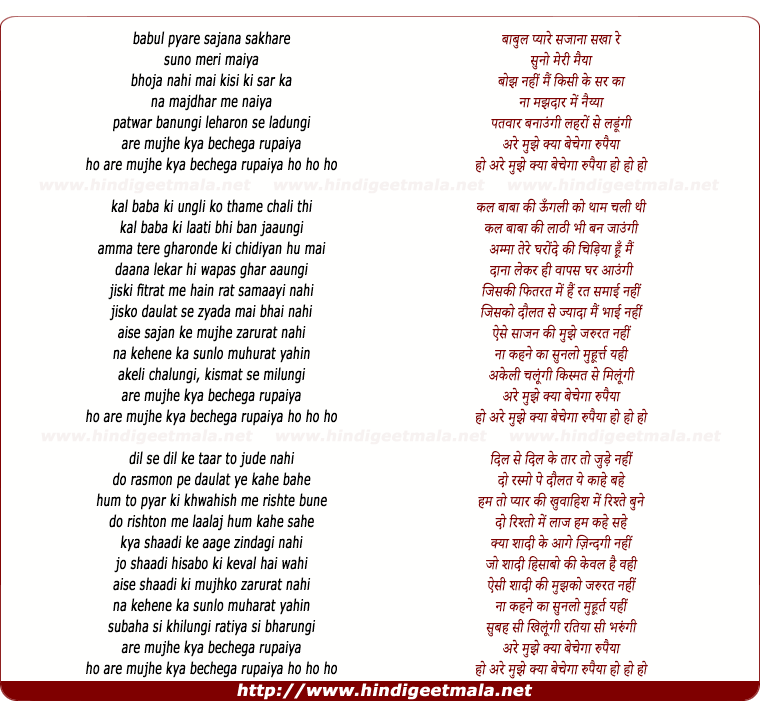 Comments on song "Mujhe Kya Bechega Rupaiya"
Soheil Ta on Sunday, August 05, 2012
It is about the situation of women in India . The lady is singing about
that , saying that daughters are not supposed to be married-off so soon by
their families trying to get rid of them , as it is so common sadly in
traditional India . Daughters should be entitled to be given all the
opportunities that sons are enjoying , This is not the translation of the
song , but the entire subject :)

Bliss Angel on Sunday, May 20, 2012
Feeling so proud to be a girl ... i don't need a man who can sell his soul
for money !! i would much rather prefer to be a independent single women
than marrying such a soulless man. seriously "arey mujhe kya bechega
rupaiyaa!! ".. :)

gaurav257892 on Monday, May 21, 2012
marmsparshee geet.hats off to composer,singer and lyricist..more than 100 times i played this...kal se iske alawa kuchh achchha hi nahi lagta,,,,,,,,,,this is the real truth,,,thanks to Aamir khan especialy...
lilypodpink on Wednesday, May 30, 2012
Beautifully sang! Women rule and men drool!! Get over yourselves pigs! Women have a mind just the same as a man. The only difference is gender and that puts none the higher.
Soheil Ta on Monday, May 28, 2012
Akeli chalungi ! YES! That's what 21th century woman must understand ! Must
be courageous ! And independent !