Average Rating : 4.15
Total Vote(s) : 86
Please rate this song between 1 star and 5 stars (5 stars being the best). Just move your mouse on the stars above and click as per your rating. Your rating will really help us to improve our website. 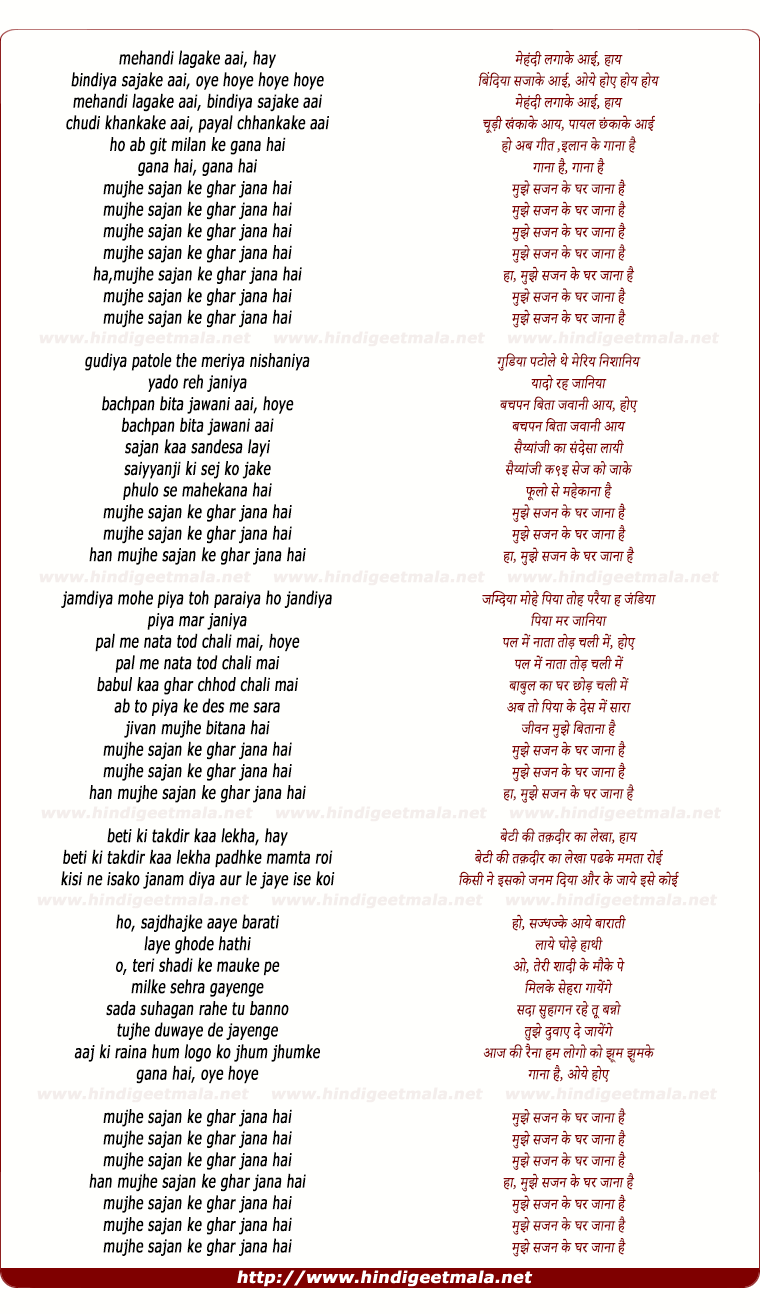 Comments on song "Mujhe Sajan Ke Ghar Jana Hai"
SuperModelVogue on Thursday, July 03, 2008
Actually, forced marriages aren't that common anymore - atleast in Indian
culture. Maybe back in the 50's or whatever but I guess that IS the way
England/America see EVERY other country - centuries behind. Tbh, it all
needs a new name now because both parties actually have a choice. No one I
know has ever been forced into a marriage, it's like, idk, your parents
introducing you to someone then, after answering yes when they ask if you
liked them, getting incredibly excited.

stophuntingwomen on Thursday, June 19, 2008
Why is it all about marriage in so many Bollywoodmovies???? Life does not
exist of marriage and bearing children! Those Indians have no better things
to do, apparently! Don't stay old-fashioned. Try other things than getting
married, for example: study, travel, make friends with people of other
cultures in order to enrich your narrow minds, that is much more important
in life than weddings!!!!!!

Rayan Khan on Saturday, April 19, 2008
I own a copy of this movie. The choreography in this song has been grossly
underrated. Also, in some ways this movie could've been a little less
melodramatic than it already is. Good issues and interesting narration
style and amazing performances, but it would've been a rather different
work of masterstroke in the hands of Shyam Benegal. Just my two cents.

stophuntingwomen on Thursday, June 26, 2008
I know what you mean, Sandafluffoid. This particular movie is critical
about a certain wedding-tradition. I saw the movie. For this reason I
placed my comment, which is also critical (!). I am trying to get attention
for this problem. Watch my clip. You can comment there if you want.
Greetings, Charlene

sidheart1 on Wednesday, August 11, 2010
i grow up wacthing bollywood movie in my cuntry now that i am older thus
arround me thinks i should have pass that stag by now..not only do i enjoy
the story, i like the whole custume and the art of dance. i use to dance
like that when i was little after wacthing the movie..lol