Average Rating : 4.08
Total Vote(s) : 79
Please rate this song between 1 star and 5 stars (5 stars being the best). Just move your mouse on the stars above and click as per your rating. Your rating will really help us to improve our website. 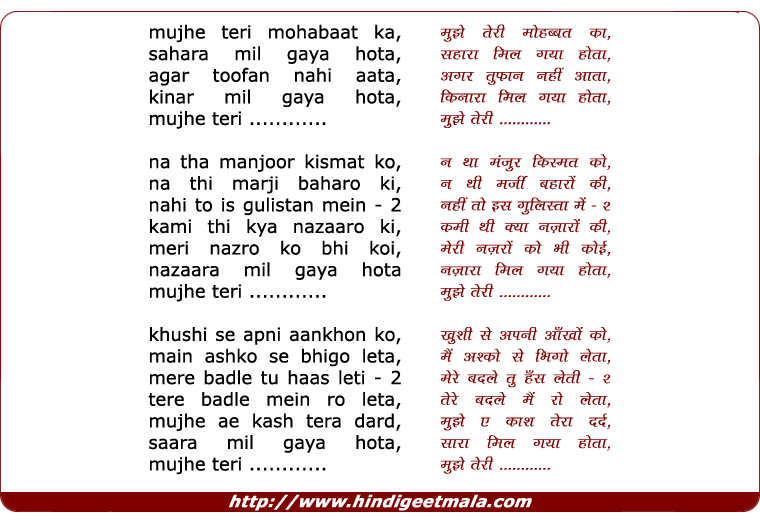 Comments on song "Mujhe Teri Mohabbat Ka"
ginakaurdhillon on Monday, January 31, 2011
This is the best and most complete version of the song I've been able to
find on YouTube. Too many uploaders try to be producers by dicking around
with all sorts of remixes. The result usually is a total mess and totally
destroys the beauty of the original. Nothing wrong with trying to improve
the sound of the original - many of these great songs unfortunately do not
have their master studio tapes still existing - but it requires patience,
skill and the right software.

ShabanaAzim on Monday, October 26, 2009
My ULTIMATE Song! Mohd Rafi is Amazing, and Lata compliments his great
voice! Mohd Rafi... The greatest singer that ever lived! SO much pain in
his voice, he will rule forever!

labeeb241 on Thursday, November 05, 2009
The way Rafi sb. started this song thrills your whole body with rush of
blood and emotions.. and little tears in your eyes. whether u been in
this situation or not.

martin garcia on Monday, October 26, 2009
i agree shabanaAzim. i get the chills when i hear mohd rafi. to say that he
was the greatest of all time is still not enough. words can not explain, i
wish i was alive when he was, iam 30 and i thank my father for introducing
me to the greatest era in hindi cinema.