Average Rating : 4.44
Total Vote(s) : 224
Please rate this song between 1 star and 5 stars (5 stars being the best). Just move your mouse on the stars above and click as per your rating. Your rating will really help us to improve our website. 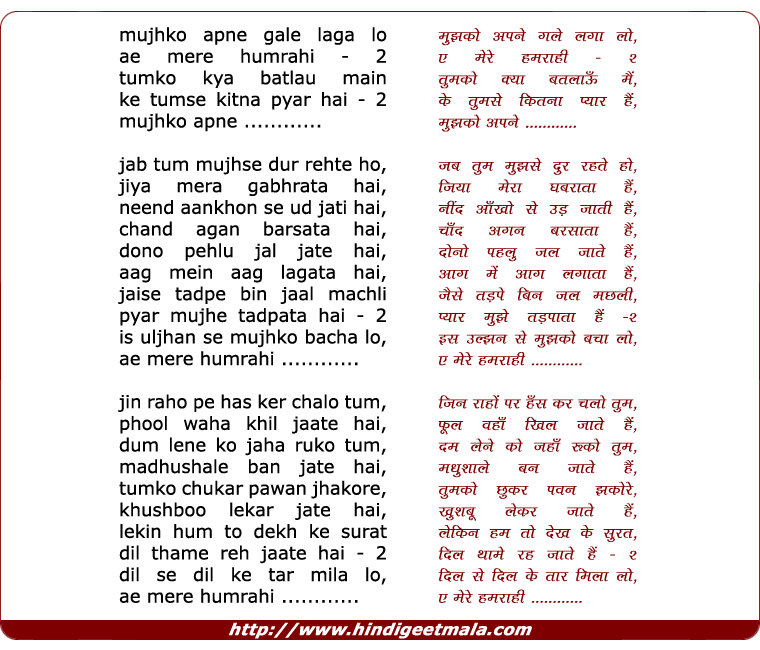 Comments on song "Mujhko Apne Gale Lagalo, Ai Mere Hamrahi"
bxj55 on Wednesday, August 04, 2010
It is the taste of people in general which has changed. If you handover Oscar to 'Jai Ho' what else do you expect? 'Tutak Tutak Tutia' and ' Ibn Batuta Ta Ta ' This is what you get. That too stolen from someone. Song writers give you what gives them bread.
Dr.G.Rama Narayana on Monday, March 26, 2012
Dear Saqibaji! The heroine was famous Telugu actress Smt.JamunaRamanaRao of yesteryears. The film was a remake of Telugu Feature Film "BharyaBhartalu" ! She acted in a couple of films like EkRaaz,RajTilak!
suresh1957 on Monday, July 19, 2010
What a lovely song ! What great singers ! How I yearn for those times when music was melodious, singers had unforgettable voices and music directors and lyricists brought out such lilting, haunting songs ! It is such a pity that Mubarak Begum today lives in absolute poverty. And that great man, Rafi is no more.