Video of this song from youtube
Average Rating : 3.91
Total Vote(s) : 101
Please rate this song between 1 star and 5 stars (5 stars being the best). Just move your mouse on the stars above and click as per your rating. Your rating will really help us to improve our website. 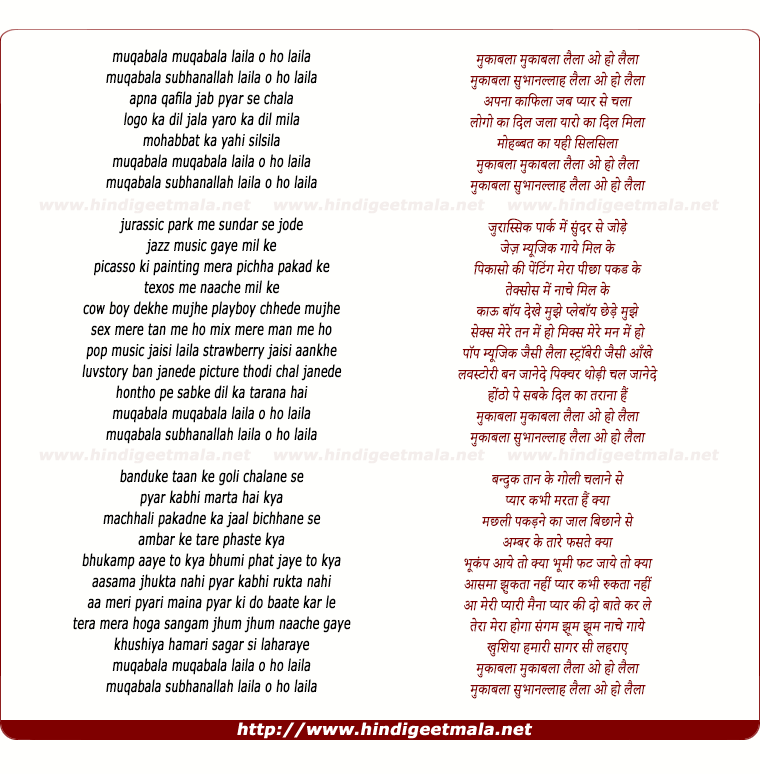 Comments on song "Muqabala Muqabala Laila O Ho Laila"
guptm on Saturday, January 31, 2009
This is the very song that has been re-copied most number of times by other
people. With this dance number A. R. Rahman had arrived with his musical
genius. Jai Ho Rahman! Redefined Indian Music!

shilpa88888 on Saturday, June 27, 2009
This actress Nagma - is she from Tamil Nadu? I know she is from South
India. Just wanted to know which part. I like this song. This actor dances
really good. Indian Micheal Jackson.

Hera X on Thursday, May 05, 2011
They don't make songs like this anymore! P.D is the South Indian version of
Michael J :) Even Nagma did a good job - who knew that she could dance like
that??

HINA SHAH on Monday, February 16, 2009
wow. I remember this from my childhood. ,when i was 7 or something., They
dont make songs like this anymore.