Average Rating : 4.62
Total Vote(s) : 34
Please rate this song between 1 star and 5 stars (5 stars being the best). Just move your mouse on the stars above and click as per your rating. Your rating will really help us to improve our website. 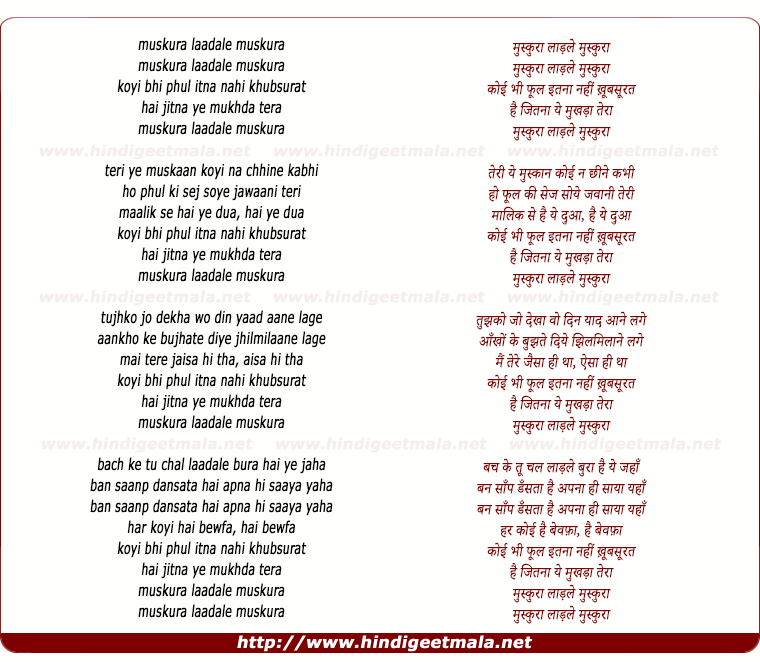 Comments on song "Muskuraa Laadale Muskuraa"
V.G BHAT SIRSI Canara on Monday, October 19, 2015
All time great musical maestros who composed ever-lasting soulful melodies.
Music that is immortal and will remain etched in our memories forever.
I consider it a huge honour & privilege to have met them and interacted
with them on numerous occasions.. They were very down to earth and greeted
all their fans with a lot of humility and affection. Despite their hectic
schedule comprising meetings with singers, producers, etc they ensured that
well-wishers like me were taken care of. Being an ardent fan, I used to
attend their sessions at Famous Studios, which many a times extended till
late evenings. Shankarji then used to send his personal assistant to see me
off at Mahalaxmi railway station..
Here’s one example of their sheer greatness. ‘Bobby’ which released in 1973
featured the song ‘Na mango sona chandi’ which become a massive hit song at
that time. But this song was composed 2 decades back only by this musical
duo and can be heard in Instrumental while Nargis bathing scene in the
movie ‘Awara’ in 1952
Even the song ‘O basanti Pawan Pagal’ can be heard in Instrumental in the
movie ‘Awara’. Such was their uniqueness and distinctiveness that tunes
were composed way before lyrics were written.﻿

Jagjit Singh Ishar on Sunday, May 22, 2011
the most butiful creature on earth is nothing other than a child. there is
god in his smiles & innocent actions. butiful lyrics, honey sweet
composition of shanker j kishen & divine sweet voice of mannadey. xlnt
upload.

Jagjit Singh Ishar on Saturday, November 30, 2013
All these legends, Shanker JKishen, Mannadey Shailendra are still live in
our minds & their name will always shine on the stellar sky for centuries
till the world lasts.﻿